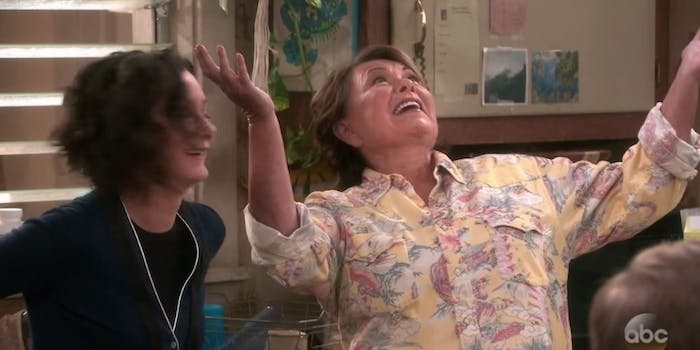 The same day it was announced Roseanne would be renewed for a second season on ABC, the title character returned to Twitter to deliver some of her conspiracy theory-tinged thoughts.

Roseanne Barr has dabbled in a conspiracy called QAnon or The Storm, apparently with roots on 4Chan, that said Donald Trump’s political opponents were involved in Satanism and sex-trafficking. It’s not dissimilar from Pizzagate, which alleged that John Podesta, the chairman of Hillary Clinton’s 2016 presidential campaign, was involved in a pedophilia ring.

But QAnon widens the scope of the theory and seems to look to Trump as a savior and the man who will break up this alleged sex-trafficking problem. And though Barr has been busy lately with the Roseanne reboot, she returned to that line of thinking on Friday night.

While some on Twitter pointed out that Barack Obama actually was the one to draw more attention to human trafficking and that Trump was benefitting from his predecessor’s policies, that didn’t stop Barr from continuing to retweet replies that praised Trump or spelled out the number of people who had been arrested for human trafficking.

But she also got plenty of pushback.

So, what is QAnon? As the Daily Beast explains: “’Q’ or ‘QAnon’ refers to a user on the anonymous message board 4chan. The user claims to be a high-ranking government official with inside knowledge of the White House where, he claims, Trump is planning mass arrests of top Democrats for allegedly being involved in a satanic child-sex-trafficking ring. Or something. QAnon’s messages have always been vague to the point of near-gibberish, opening them to interpretation. When QAnon has given specifics—like the time he claimed John Podesta would be arrested or indicted Nov. 3—the prediction has fallen flat.”

This isn’t the first time Barr has dabbled in the conspiracy theory on Twitter, and considering Trump called her after the premiere of Roseanne did huge ratings and then publicly commented on how proud he was of her—perhaps because it’s been revealed that the show was rebooted, in part, because of Trump’s election—her latest Twitter thoughts have startled some.

You all know Roseanne is a QAnon conspiracist who thinks the Deep State is using MKUltra to control people's minds, right? pic.twitter.com/xGqveTwm19

But it sounds like Barr—who also retweeted Parkland shooting theories this week—is done for now.