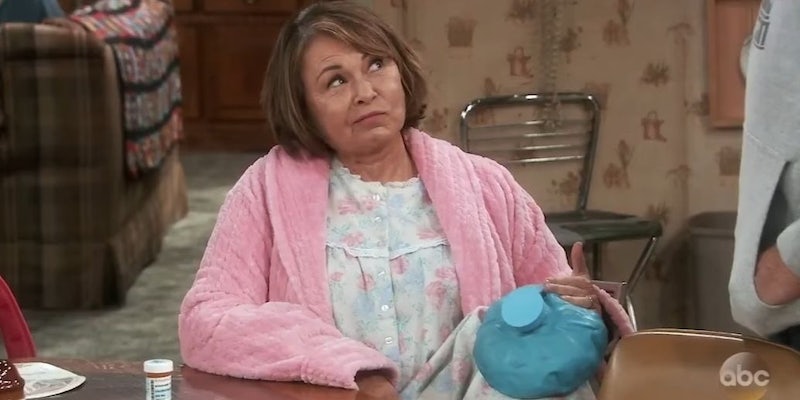 ‘Roseanne’ was rebooted as a reaction to Trump’s election, TV exec says

After 18.2 million people tuned in to the Roseanne reboot this week, President Donald Trump made news by calling Roseanne Barr to congratulate her and trumpeting her show in a speech on Thursday. Turns out Trump had good reason to be happy with the ratings.

According to the New York Times, ABC network executives came up with the idea for reinventing the series the day after Trump was elected president. (For the record, show star and executive producer Sara Gilbert has said the reboot was her idea, and she helped get the cast on board.)

“We looked at each other and said, ‘There’s a lot about this country we need to learn a lot more about, here on the coasts,’” Ben Sherwood, the president of Disney and ABC’s television group, told the newspaper.

Said Channing Dungey, the president of ABC entertainment: “We had spent a lot of time looking for diverse voices in terms of people of color and people from different religions and even people with a different perspective on gender. But we had not been thinking nearly enough about economic diversity and some of the other cultural divisions within our own country. That’s been something we’ve been really looking at with eyes open since that time.”

The executives and writers apparently believed that having Barr play a Trump supporter on the show who could have messy political conversations with her liberal sister, played by Laurie Metcalf, might appeal to those who believe in Trump.

Interestingly, the strategy seems to have worked.

As the Times wrote, “The top markets for the debut read like a political pollster’s red-state checklist: Cincinnati; Kansas City, Mo.; Tulsa, Okla. Liberal enclaves like New York and Los Angeles did not crack the top 20.

Trump also reveled in the show’s success, telling a crowd on Thursday, “Look at Roseanne! Look at her ratings! They were unbelievable! Over 18 million people! And it was about us!”

Barr, though, has taken plenty of heat this week. She retweeted a Parkland shooting conspiracy theory that teen activist David Hogg was making a Nazi salute. An image of a 2009 photoshoot featuring Barr dressed as Hitler also has resurfaced.

Barr, a Trump supporter, has spoken about how she felt the need to represent voters who Hollywood tends to ignore.