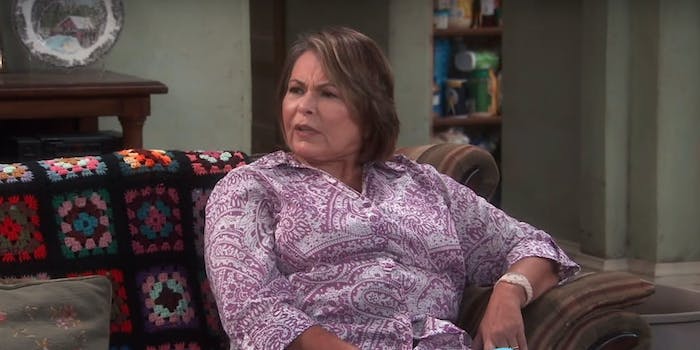 Why is she tweeting about David Hogg?

The long-awaited Roseanne reboot debuted on Tuesday night and clocked 18.2 million viewers, according to ABC. The network claims it was the highest-rated comedy telecast on any network since September 2014. Its creator celebrated the big week by apparently tweeting a conspiracy theory about the Parkland shooting.

It was about viral teen activist David Hogg, but it’s not clear if ABC made Roseanne Barr delete it, as alleged below, or if she deleted it on her own. Barr has been divisive on Twitter, and often retweets conspiracy theories. She’s been embraced by the right in recent years.

The debunked theory claims Parkland shooting survivor Hogg did a Nazi salute at the end of his March for Our Lives speech on Saturday. It was pointed out that Barr retweeted another Hogg conspiracy theory in February.

Dear Lord @therealroseanne you know this is most likely a troll meme account, right? You're entitled to your opinion but this is low even for a Trump supporter.

ICYMI Roseanne replied to a David Hogg conspiracy theorist who tagged the actual boy, but then ABC made her delete it. Don't worry, here's a screenshot: pic.twitter.com/yftDrSdq6b

She also retweeted this a few weeks ago. I've reached out to @ABCNetwork and @RoseanneOnABC and didn't get a response. pic.twitter.com/MYTmMIejdS

For a show that hasn’t aired in 20 years, her return to prime-time TV is quite a feat. The series has gotten some additional promo in the conversation around creator Barr’s character Roseanne Conner being a Trump supporter this time around—and the blurred line between the two characters.

Could Barr’s views actually be a draw? That’s fairly evident in the returns, and the 2018 Roseanne marks a prime-time show that’s tackling the political familial divide in real time. In the debut episode, the divide is between Roseanne and her sister Jackie (Laurie Metcalf), who haven’t spoken since the 2016 election, but the episode doesn’t linger on politics. It will be interesting to see if people stick with it.