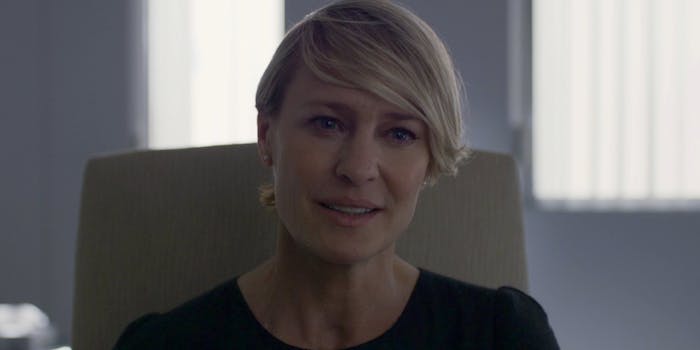 ‘You’d better pay me or I’m going to go public.’

During an appearance at Rockefeller Center Tuesday, House of Cards star Robin Wright opened up about equal pay and how she convinced Netflix to match her salary to co-star Kevin Spacey‘s.

Wright was in New York to promote her campaign to protect Congo’s natural resources, but her aside about the wage gap ended up stealing the show for a lot of audience members.

“It was the perfect paradigm. There are very few films or TV shows where the male, the patriarch, and the matriarch are equal. And they are in House of Cards,” Wright said, according to the Huffington Post.

“I was looking at the statistics and Claire Underwood’s character was more popular than [Frank’s] for a period of time. So I capitalized on it,” Wright said. “I was like: ‘You’d better pay me or I’m going to go public.’ And they did.”

According to the Guardian, Wright has appeared in all 52 House of Cards episodes to date, and has directed several of them. Plus, both she and Spacey are listed as executive directors for season 5.

Yet, for some reason, it took Wright demanding equal pay and threatening to go public with the gap for her salary to match her co-star’s. Showbiz!