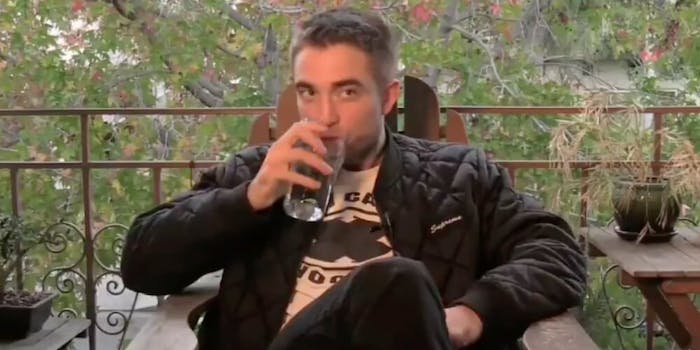 Robert Pattinson spits gum into water glass, proceeds to drink from it

Fans are into it.

Robert Pattinson seems like one of the most chill celebrities you could ever meet. Whether he’s taking his stalkers out to dinner or hating on his own movies, he’s just got that laid back attitude that makes you realize there probably isn’t much that could faze him.

So fans didn’t find it all too surprising when they realized that, in the middle of an interview, RPattz dropped his gum in a nearby glass of water and, only moments later, picked up that same glass to take a sip.

robert pattinson throwing his gum in a glass of water and then drinking from it pic.twitter.com/hFa2V5wAID

Whether it had been a strange but purposeful power move by the future Batman actor, or if he had just made a terrible mistake was unclear, but fans are utterly taken in by this potentially charming display of cluelessness.

“Lmfao you cannot tell me that this man didn’t realize what he did and instantly regret it,” one fan tweeted.

Some are actually digging just how gross and chaotic Pattinson seems to be.

“Ugh he’s so gross, I love him,” another wrote.

this mans energy is just chaotic

ugh he’s so gross, I love him

While some were grossed out by the possibility of him retrieving his recently discarded wad to chew once more, others felt it was incredibly relatable and possibly even a smart idea.

“Okay but i…… do this when i have cold water and minty gum,” one fan admitted. “I like to let it kinda freeze while it’s in the water so i can chew it again.”

okay but i…… do this when i have cold water and minty gum. i like to let it kinda freeze while it’s in the water so i can chew it again. i guess im the only one lmao

I’ve never thought of doing that before. He’s smart. 👀✨

But chaotic energy aside, the ultimate question here remains unanswered. Did Pattinson swallow the gum along with the water? Or did he just get a minty flavored mouthful? These are the things that will keep RPattz stans up at night. We need answers. We deserve answers.

i wanna be the glass