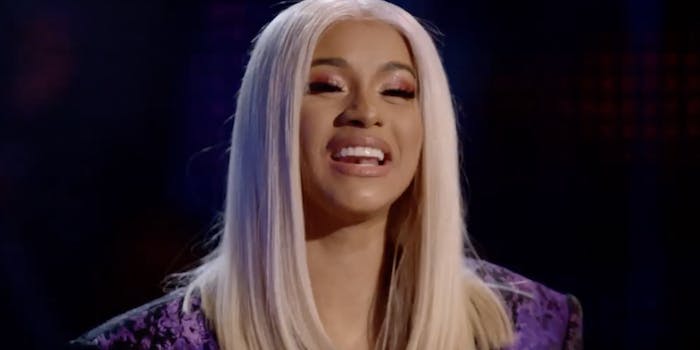 Cardi B, Chance the Rapper, and T.I. will judge.

The series, debuting on Oct. 9, features hip-hop superstars Cardi B, Chance the Rapper, and T.I. as contest judges in hot pursuit of hip-hop’s next star. Cardi, of course, will be heavily featured in her natural element, eating delicious fruits in the lap of luxury.

A multi-city search for talent will commence in cities including Los Angeles, New York, Atlanta, and Chicago.

Cardi premiered the first-look teaser during her set at the 2019 Made In America Festival. Each of the 10 new episodes of Rhythm + Flow drop on Wednesdays, with the following stages of the competition:

Week 1 (starting Oct. 9) will feature auditions, which are sure to be a treat. Similar to American Idol and other music contests, audiences should expect surprises, both good and bad.

The third week (starting Oct. 23) will dig into sampling and collaborations, portions that will test teamwork and understanding of rap music as a business.

Cardi’s foray into contest judgeship will likely drive the show, which should easily find Rhythm + Flow a second season.