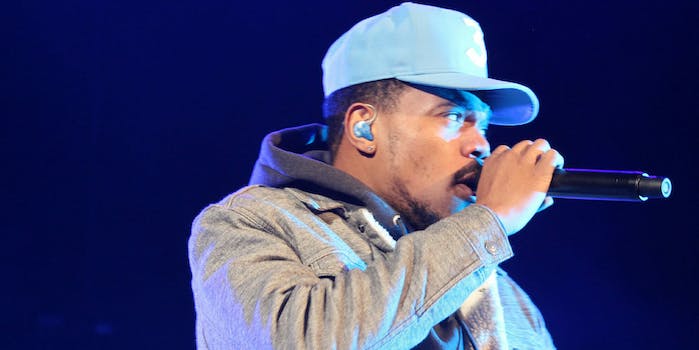 Chance the Rapper apologized on Twitter for working with R. Kelly

He took to Twitter to clarify his comments in the docuseries Surviving R. Kelly.

Chance the Rapper, who has worked with R. Kelly , apologized on Twitter on Saturday, clarifying what he said in the documentary Surviving R. Kelly.

Since the docuseries dropped last week, fans are scrambling to come to terms with the extent of the trauma caused by the “Trapped in the Closet” singer, spanning decades of sexual, mental, and physical abuse of Black women and underage Black girls.

Chance, who performed with Kelly at Lollapalooza in 2014, and featured Kelly on his track “Somewhere in Paradise,” is one of the artists taking steps toward making amends—or at least acknowledging their roles in promoting and protecting Kelly.

This was in reference to an interview featured in the series, in which Chance said, “Maybe I didn’t care because I didn’t value the accusers’ stories because they were Black women.”

Chance The Rapper really fucking said he didn’t care about the victims because they were Black women. There is audio to literally prove that he said that. I’m literally disgusted. Fuck him and everyone else who still supports him after that statement.

What the headline should have read is: Despite Chance the Rapper having a black daughter and fiancé he discounted the victim’s stories because they were black women. He now regrets making music with a sexual predator because it is bad for his brand. https://t.co/9TMFiNqkdn

Never will I support Chance the rapper!That comment set me over the edge. So, because the women were BLACK, there was no value! Sick of these Black men that create this stigma that BLCK WOMEN are not worthy! FUCK YOU AND FUCK ANYONE ELSE THAT FEEL THE SAME! #SurivingRKelly

He then issued a second clarification about his comment:

Anyone mentioning that I have black women in my family is deliberately missing the point. Regardless of the proximity of beneficial BW in your life, or being black yourself, we are all capable of subconsciously discrediting BW and their stories because its indoctrinated.

Some are accepting this apology, but many on Twitter are urging the rapper to put his money where his mouth is.

As a survivor, I can get crazy angry when I hear a man admit to dismissing an accuser due to prejudice. I can understand why a black woman would be offended by what he said, but I also know how important it was for him to say it. All men like him should admit it and repent.

Last thing before I dip: I'm glad Chance The Rapper told the truth. I'm tired of Black Men and White folks gaslighting us. They don't believe us BECAUSE we are Black Women. He said it outright–stated a nasty truth that is killing us in every arena from childbirth to DV.

Wow. Talk about growth. When you can analyze yourself and see where you’re wrong in the situation and what you can do to be better. That’s admirable.

@chancetherapper was being honest with what he was saying. Yall no damn well that a lot of people don’t respect black women. Now for a black men be admitting that is a step in the right direction, he is on the road to redemption do not crucify him

It’s easy to apologize. But every survivor must endure pain & find ways to heal for the rest of their lives. DO MORE. DO BETTER. Find ways 2 give back 2 survivors & agencies working towards ending sexual violence. Hold others accountable. Enforce the systems around you to change.

The series has led to numerous conversations on social media—from the invisibility of Black women’s trauma to the list of other artists who refused to be interviewed for the docuseries, implying some level of complicity in Kelly’s abuses.

The docuseries is a lens into the decades of abuse numerous Black women suffered at the hands of ]Kelly, who has denied all allegations. Reporter Jim DeRogatis has been reporting on Kelly’s abuse for almost two decades, but the documentary series has brought renewed scrutiny to the way Kelly has thus far escaped punishment, both professionally and legally.