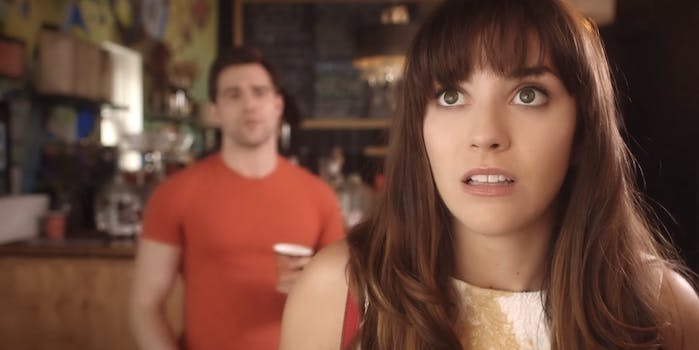 Refinery29’s new webseries The Real Life of a Romcom Protagonist is a hilarious send-up of everything we love to hate about rom-coms. There’s a perky protagonist, a slew of unlikely meet-cutes, and best friends who are as hollow the box of Cheez-Its you devoured while you watched that random Katherine Heigl flick that mysteriously appeared in your Netflix queue.

If you’ve ever loved, or loathed, a rom-com, the series is a must-watch.

The six-episode series is available on Refinery29’s website, and you can watch the first episode on YouTube.

Sudi Green, who authored the series, is a New York–based comedian who produces hilarious music videos with her musical sketch comedy team Pop Roulette and hosts the monthly show Theme Party at UCB East. Green spoke to the Daily Dot about her love and hatred of rom-coms, writing a part for her real-life BFF, and her favorite moments from the series.

How do you feel about rom-coms?

I have a love-hate relationship with them, because I think everyone loves the fantasy of being Jennifer Lopez—and I definitely had an obsession with them in middle school and high school. My best friend Janan and I would watch maybe three or four a night. This was the early 2000s, the golden age of rom-coms.

But now I realize that so much of the ideal woman those movies portray is ridiculous. I mean Kate Hudson in How to Lose a Guy in Ten Days is always eating a burger in every scene and then wears yellow silk in the final scene—no way.

What inspired this series? How did it come to life?

I was asked to pitch to Refinery29 and create a vehicle for the star of the show, Allison Brown, who is also my best friend and roommate since college.

I wanted something that a lot of young women would relate to, that had a feminist perspective but would also be fun. I wanted to embrace the rom-com thing but also poke holes in it.

The director, Kirk Larsen, was very instrumental in creating the series. And Allison had a lot to do with forming Maisie. She named her, gave her a clearer perspective, and also wrote the theme song. I was focusing so much on the tropes of the rom-com that the main character actually was under-developed. I had become the screenwriter of all those bad rom-coms, and Allison was really involved; she added more oomph to Maisie.

I love how the episodes focus on different tropes in rom-coms. Can you tell me a little bit about that? Did you start out knowing you wouldn’t follow a traditional narrative?

Yeah I knew I wanted it to feel more like sketches that took place in the same heightened world.

Every episode focuses on a trope, and we blow out the ridiculousness of that situation, or we call it out, or both. One of my favorite episodes is the one where the funny best friend, played by Laura Wilcox, goes into her lair. The funny best friend is this one-dimensional bounce board, then we blow that idea out and see that that is truly all she is.

Is there a season 2 in the works?

Kirk Larsen and I had a huge long list of tropes. So hopefully we can keep going with it!