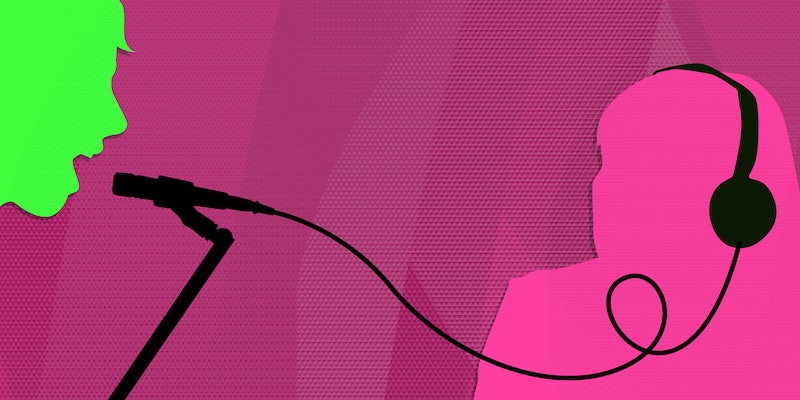 Podcasts will ring in the age of equal-opportunity entertainment

For long-overlooked communities, podcasts are the great equalizer.

When Fifty Shades of Grey caught fire in 2011, many pointed to e-readers like the Amazon Kindle. Self-conscious housewives were more apt to enjoy erotica because no one could judge the book by its cover, the theory went. This would bode well for podcasts.

Twenty-four percent of Americans—67 million people—listened to a podcast in February. That’s up from 17 percent in 2015. Over the last two years, monthly podcast listening has grown by 40 percent, with a growth curve that looks to be steadily pointed upward. And many of these new listeners are finding podcasts through a groundswell of weird, niche topics.

There are now podcasts dedicated to colon cancer professionals and fly fishermen, which is well and good, particularly for the loner fly fisherman in your family. This listening phenomenon might be even more important for once-taboo or ignored communities, like black culture, people interested in transgender rights, and even prisoners. And in the firebrand age of President Donald Trump, political podcasts—either for or against the commander-in-chief—have come of age, albeit with a few loud talking heads offering fringe conspiracies.

Once you’ve removed the shame from consuming certain media in public, people may make all sorts of different decisions that feed coarser, or at least darker, desires. It’s a fun theory—but it’s missing the bigger picture.

Podcasts aren’t going to lead to a nation of Grey listeners on the bus. Yes, people are choosing weirder, hyper-specific topics. (The Adventure Zone, a show where three brothers and their dad play Dungeons and Dragons over Skype, has an audience in the hundreds of thousands.) But that’s because podcasts are entertainment’s great equalizer.

Podcasts offer everyone a human voice. The incarcerated, feminine men, even Lego enthusiasts. From intersectional feminism to gender identity, they teach thousands.

Many independent podcasts don’t depend on ad revenue to sustain their shows, and the barriers to starting a podcast are financially low: You can host it for free on sites like SoundCloud, record free audio on Skype, even licence free music from composers via creative commons. Unlike institutional media companies, podcasters can speak directly to their listeners with no constraints.

As a podcast producer and consumer, I’ve been trying to tackle the idea of how to provide information to people when they don’t know they want or need it. It’s no secret that, in 2017, race and culture permeate every conversation. Podcasting is no different. There is measurable evidence that podcasting is still a majority white, male industry, and there have been very recent movements trying to address this. But there’s also no denying that podcasting, as an industry, and as a subset of the internet, is making consequential advances in the fight to move messaging forward for these under-represented voices.

Guys We Fucked is an independent comedy podcast where Corinne Fisher and Krystyna Hutchinson bring guests on to discuss their sex lives, partially to bring these discussions to more people. The show’s tag is “the anti-slut-shaming podcast.” In recent episodes, the two hosts have interviewed non-binary writers, transgender comedians, and bisexual women of color.

“People are interested in hearing about other walks of life, but it just has to be very, very easy for those people to get it,” Fisher tells the Daily Dot. “People aren’t going to go to Harlem and hear a speech on black culture. It would be nice if they did, but they’re not going to do it.”

Fisher says that because those ideas are accessible from their living room, just by searching their phones, they’re more willing to listen. As such Guys We Fucked nets more than 1.2 million listens a month, according to Fisher.

“I try to use my platform to make sure not to just have white dudes on,” Fisher says. “I try to find these people who have these different outlooks or different experiences.”

Fisher and Hutchinson are taking a journey in real time through listener emails, social media, and through conversations with guests. They’re discovering that their words have meaning and people are listening to them— learning doesn’t seem so lonely when you know the lessons are shared.

This journey isn’t necessarily unique to podcasts, though. Just ask Sruthi Pinnamaneni, a radio veteran and producer of Gimlet Media’s popular Reply All.

“Current-day podcasting is like back when there were hours that people had to fill [on the radio] and they just brought young people and weird people and gave them an hour and said ‘just do whatever you want here,’” Pinnamaneni says. “And that’s where something like Radiolab is born.”

Unlike radio, podcasts usually don’t have to make concessions for language or length. Say “fuck” on a five-hour show, and you only have to answer to yourself (or your mother). And once again, removing concerns about audience size or pressure from network executives allows podcasters to play with format.

Mike Brown is a co-host of Comedy Outliers, along with Brandon Collins. Their show explores the New York underground comedy scene and their journey to making it in the business through interviews with other comedians.

“People love to listen to people talk about what they’re enthusiastic about,” Brown says.

Brown says his show takes up a very local but very cool and weird space.

“I’m talking specifically about comedy from a New York independent perspective of making it to the next level,” he says. “And some people are really interested in that, and they want to hear the ins and outs of comedy from my perspective, which is fun because I would never think that anybody would really care.”

Brittany Luse, a co-host with Eric Eddings of For Colored Nerds (“conversations black people have when white people are not in the room”) says that the people they wanted to most please by making this show was themselves.

“And that remains the same,” she says.

Listen to just one episode, and you’ll realize it’s an amazing commentary on culture put through the lens of two friends, who also happen to be black.

“We like to think of the show as people learning along with us,” she adds.

And we are learning. In a space becoming increasingly crowded with old-school radio hosts from larger media outlets, I hope podcasts don’t lose that core accessibility that has allowed genuine conversation about unique topics to flourish.

Because of the open-access nature of podcasts, no one seems worried. Fisher puts it best: “Podcasting is always going to be more progressive because it’s a platform for fucking weirdos.”