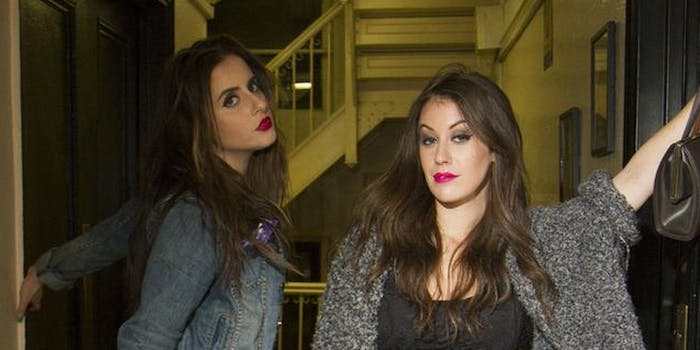 The podcast that attempts to answer the eternal question: 'What happened last night?'

On a recent Valentine’s Day episode of their podcast, NYC comedians Corinne Fisher and Krystyna Hutchinson discussed the eternal question of what happened last night, and distilled the daunting task of remembering details of a sexual encounter into one universal truth:

“Sometimes after sex you can feel that phantom dick in you.”

Welcome to Guys We Fucked.

The weekly show, hosted by podcast think tank Stand Up NY Labs, debuted in December on Soundcloud, where it’s racked up more than 220,000 followers in just four months. iTunes won’t list the show in its store; Fisher and Hutchinson have never received an official reason why, but it might be “the way we used the word fuck. It’s not like, ‘What the fuck?’ It’s the actual act of fucking.”

Fisher explains they wanted to do something that was “helpful to people, but funny and entertaining, not precious and pretentious the way self-help can be. So it’s like modern self-exploration.”

She adds that this podcast is coming at the perfect time, in terms of elevating dialogue about sex-positivity online. Since they’ve started getting press for the show, they’ve naturally started getting more negative comments.

The culture around “slut-shaming” has grown with online anonymity. Though some might argue the word came be reclaimed, Guys We Fucked is attempting to change the word’s weight.

“I don’t think the word slut has anything positive about it,” Hutchinson says, “and so by forcing this issue, we’re giving the word a little less power. And when you’re talking about sex, I don’t think there should be that vocabulary to put people down and shame them and make them feel bad.”

The Internet has always functioned as a confessional, but there’s a tangible power in owning your past and channeling that into realistic view of sex, which is often lacking from Internet spaces. On one episode, Fisher and Hutchinson read a listener comment from a woman in New Delhi, who said the show made her feel more comfortable with sex. In future episodes, Hutchinson says they hope to bring sex workers on the show.

Apps like Secret and Whisper are now being used as outlets for anonymous expressions of love and sex, not all of it positive, but the ladies see it all as part of a larger shift toward genuine expression online.

“So many of our listeners feel weight lifted off their shoulders because they’ve made similar mistakes or admitted similar things to us,” Hutchinson says, “and they hear somebody else be honest about the mistakes they’ve made, and it’s inspiring. I think being honest about your mistakes is important.”

“I think it’s a logical step for standup comedians,” Fisher adds, “and I think that’s what’s attractive about a lot of standup comedy. In the past couple years, it’s gone from punchline, joke to, ‘This is a story about something crazy that happened.’ I think we’re just at a time in our culture where we’re ready to be more honest; we don’t want to hear made-up bullshit, we’re very into real.”