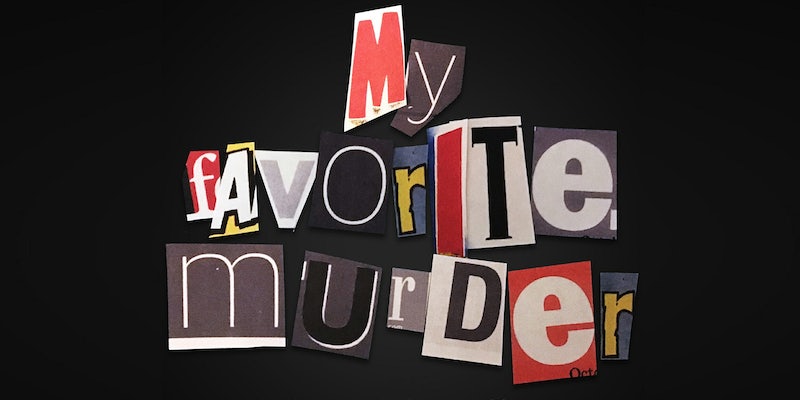 The communal power of ‘My Favorite Murder’

A night with the 'Murderinos' who power the wildly popular podcast.

At the Paramount Theatre in Austin, Texas, a majority of the audience is wearing black. There are shouts of acknowledgment and recognition, as Murderinos —the nickname for fans of the podcast My Favorite Murder—embrace and chat. Many are meeting for the first time, perhaps tethered until this point by Facebook groups or social media. Some are surprised by familiar faces: ”You’re a Murderino?”

My Favorite Murder, the comedy true-crime podcast hosted by Georgia Hardstark (Slumber Party with Alie and Georgia) and TV writer Karen Kilgariff (Mr. Show), has become wildly popular since debuting in January 2016, and it’s in large part because of its devotional fandom.

During a live show at Moontower Comedy Festival this weekend, Hardstark and Kilgariff had to caution the audience not to scream out too much and interrupt the show. Kilgariff addressed the vocal crowd’s cries of adoration: “This is when we announce we’re starting a megachurch.”

They told two Texas-based stories for the occasion: one about Elmendorf alligator enthusiast Joe Ball, and one about the mind-boggling Mary Morris murders. Live, the gasps and “holy shit”s are amplified in stereo. As we part ways for the night, a slogan from the show can be heard echoing down Congress Avenue, doubling as a friendly goodbye: “Stay sexy. Don’t get murdered.”

The show has another oft-quoted line: “You’re in a cult. Call your dad.” But the MFM fandom is its own unique cult. It has created prosaic fan art and crafts, and submitted stories about murders in listeners’ hometowns. There are regional Murderino Facebook pages and meetups, and the main MFM Facebook group boasts more than 128,000 members.

I started listening to the podcast during evening runs, assuming that if someone did try to assault me, I’d be so enraged by whatever was being discussed that I would immediately unleash it on the attacker. I found solace in the MFM group: Other women had the same escapist impulse. “Stay sexy. Don’t get murdered” was even reportedly used in a real-life event where a woman noticed a man hiding behind another woman’s car.

My Favorite Murder is part of a bigger true-crime wave: S-Town, Making a Murderer, podcasts like Someone Knows Something and Last Podcast on the Left, and Netflix’s growing catalog of true-crime documentaries. It tackles more well-known names like Albert Fish and the Black Dahlia murder, as well as more obscure regional murders and tales of survival. But MFM provides a more organic thread: How women can protect themselves.

Because of the subject matter, the show isn’t necessarily bingeable but Hardstark and Kilgariff are easy to hang with. They mirror our huffs of disgust when we learn about a violent predator who was released early for “good behavior,” or a deviant act committed against a child. We nod when they say “fuck politeness,” another oft-quoted phrase that allows women to break free from the notion that we mustn’t be rude. This is spelled out in the first episode of Unbreakable Kimmy Schmidt, when Matt Lauer asks one of the Indiana Mole Women why she went with her abductor. “I’m always amazed at what women will do because they’re afraid of being rude,” he responds.

MFM is categorically a comedy podcast, and the hosts will be the first to tell you they’re by no means a definitive source of info. But there’s a psychological element, a focus on violence against women in its serial forms. You also get a more zoomed-out picture of how the justice system fails women, and puts others in danger by routinely releasing violent predators. A recent episode about 24-year-old Mitrice Richardson and her mysterious death shines a light on how the system failed her, and the institutionalized racism that might have played a part.

It doesn’t have the distanced view that many true-crime shows do. It revels in its curiosity, outrage, disgust, humor, and imperfection. The hosts talk about their own issues with depression, anxiety, and addiction, as well as the benefits of therapy. MFM provides a place for those of us who’ve long been drawn to the morbid and macabre—who, say, read Helter Skelter when they were way too young and obsessed over the Zodiac Killer—but weren’t sure there were other people like us.

Emily Groenendal, one of the admins of the Austin Murderino Facebook group, says she grew up in a conservative household where murder was not discussed, but her “little Murderino self came to life” in middle school, after her father told her about a chance encounter with Jeffrey Dahmer. She sought out MFM at a friend’s suggestion, and found her people.

The group has also funneled its fandom into real causes, like raising money for Austin shelter SAFE. Zilker Brewing Company created a Murderino ale for the March event; brewer Jason Freed is a fan of the show and true crime, and discovered MFM while listening to Harmontown.

“Media is dominated from the male perspective, so it’s cool to have a podcast that’s female-driven,” he says.

In addition to providing a place for women to discuss fears and anxieties, the podcast has also apparently enlightened some male listeners who’ve admitted that they didn’t realize certain behavior that seems normal to them might intimidate women.

“That’s something that could only come from the female perspective,” adds Freed. “Actions that could be intimidating to women. Some guys aren’t sensitive to that… It’s super important to get that message out there.”

MUST-LISTEN EPISODES TO GET YOU STARTED

The show has even spurred listeners to change theperception about women’s interest in murder and true crime, and seek out therapy. Speaking to the Atlantic, psychologist Amanda Vicary related that the true-crime genre is popular with women because “we’ve adapted to pay attention to anything that can help us increase our survival.”

Austin Murderino Gina Hernandez found MFM after being diagnosed with thyroid cancer last August, and needing an alternative to singing along with the radio. “I fell in love with MFM because they talk about really dark stuff and even though they joke around it never feels like they’re making light of anything,” she says.

“This community of listeners are so supportive and truly want better for the communities they live in,” Groenendal says. “I also love being able to start a conversation with, ‘Did you hear about that murder…’ and not get funny looks.”

In the most recent episode, Kilgariff talks about a post on the MFM group page, which recounts a Milwaukee live show and the friendship and camaraderie of the Murderino community.

“Actually, we didn’t create this community,” Kilgariff says. “You guys have created it for yourselves. We’re just up here kind of like reading these stories, and recording these podcasts. You guys are the boots on the ground.”