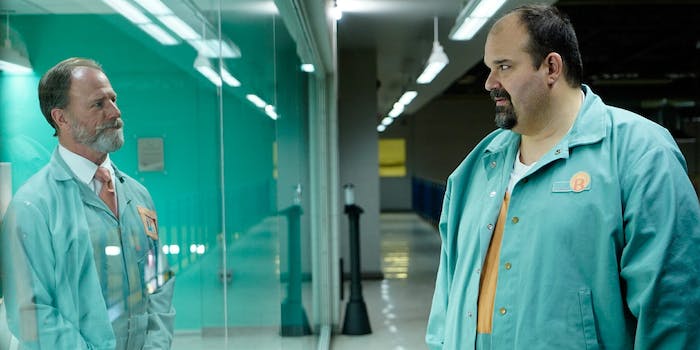 The sci-fi author gets the anthology treatment.

Philip K. Dick was always good at predictive text—not necessarily about tech we would be using in the future, but the ideologies and power structures that might come. Dick’s sci-fi short stories from the ‘50s provide the source material for Philip K. Dick’s Electric Dreams, the new TV anthology packaging of the author’s early works. A collaboration with Amazon Studios and Channel 4, where Electric Dreams partially premiered in 2016, this 10-episode series is a bit uneven, but more than 50 years later, some of Dick’s worlds still mirror our own.

Amazon’s adaptation of Dick’s The Man in the High Castle arrived at a crucial time, capitalizing on the mounting tension and authoritarian tone of the Trump administration. How does Electric Dreams do in terms of resonance? One of the best examples is Mudbound director Dee Rees’ “Kill All Others,” a take on Dick’s “The Hanging Stranger,” which revisits the hate-mongering, anything-goes news cycle of the 2016 election. Mel Rodriguez (The Last Man on Earth) plays a solemn factory worker who tunes into a presidential candidate’s subliminal calls for violence, which no one else seems upset about. It attempts to suss out what “other” means, but ends up offering a broader, starker commentary on American values.

“Safe and Sound,” based on the story “Foster, You’re Dead!,” takes Black Mirror’s “Arkangel” to a terrifying conclusion, switching out Cold War paranoia with the threat of terrorist attacks, and bomb shelters with invasive surveillance tech. In “Crazy Diamond,” Steve Buscemi and Westworld’s Sidse Babett Knudsen dance around a Blade Runner-esque premise about synthetic humans on their last life, but set in a lush seaside community where human-pig hybrids exist and environmental collapse looms. It contrasts some of the future-tech focus with a more cartoonish subtext.

There are some clunkers, though. “Real Life” limps under a premise about connected consciousness—this time between a cop (Anna Paquin) and businessman (Terrence Howard)—mainly because it’s already been done on TV and film. For an episode about two people’s connection, Paquin and Howard don’t seem to have any. Likewise, “The Impossible Planet” has an interesting premise but feels truncated to fit an episodic run, when perhaps it should have been expanded. “Father Thing” features the great Greg Kinnear as a suburban dad with a secret, but the premise has been tried before and done better. I did appreciate that it feels like a rejected Monsters episode.

The better episodes, like “Kill All Others,” work because they connect on a deeper, more human level. Take “The Commuter”—not to be confused with the new Liam Neeson film. Timothy Spall is magnetic as a train station employee who discovers a stop that’s not on the map and pays it a visit. His face is its own map, showing an inner struggle to connect with his wife and son, and the episode offers more insight into what drives us. In “Human Is,” Vera (Essie Davis) finds herself in a tense, joyless marriage with Silas (Bryan Cranston) as they work to survive on Earth in 2520. She fills this void by visiting a freaky sex cave so she can enjoy another person’s touch again. The episode touches on class and wealth but ultimately tries to answer a more philosophical question: If your husband came back from another planet possessed by an alien, but this “new” man was more attentive and affectionate—especially in bed—would you be justified in overlooking that to connect with someone again?

Electric Dreams will get Black Mirror comparisons, of course, and while that series is imprinted with creator Charlie Brooker’s distinct style and sensibility, different directors and writers allow Electric Dreams to costume-change from episode to episode. There’s also not the constant dread and twist-threats of Black Mirror. Here, the future and its attendant accessories and ideas are more philosophical and metaphysical in scope. If the series doesn’t feel of a whole, it might be because it’s debuting at a time when some of the subject matter is more open to interpretation. Perhaps it offers a new predictive text.