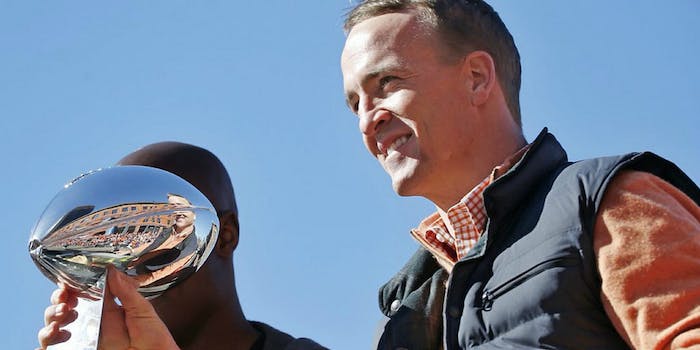 It wasn't all praise. Steelers running back DeAngelo Williams, for one, was not impressed.

But after the press conference Monday in which Peyton Manning officially announced his retirement, less than a month after winning the second Super Bowl of his career, his brother’s take was much different. In a piece that aired on ESPN that looked back at Peyton Manning’s career, Eli Manning narrated old home movies and season-defining highlights, and he talked about what his brother meant to him.

And it was precious.

Not everyone had nice things to say about Manning. Take Pittsburgh Steelers running back DeAngelo Williams.

Though Manning is an all-time great and one of the best quarterbacks ever to take the field, Williams—who led the NFL in rushing touchdowns as a 32-year-old last year but who has also underperformed for much of his career—didn’t think much of Manning’s final season.

😂u are kidding me right last year Peyton manning without the name would never have been in the NFL anywhere Pete😡😡 https://t.co/C4PvxGztIh

Williams, of course, is right. Manning, for much of the 2015 season, was the worst he’s ever been. But Manning did help his team win a Super Bowl, so there’s that.

Aside from Williams and some on Twitter who reminded us about Manning’s controversies during the past few months—including allegations that he sexually harassed a University of Tennessee trainer when he was in college, and that he had human growth hormone delivered to his house—most people took to social media to praise Manning and his career.

Ending his retirement presser with "Omaha"… What a legend… Congrats Peyton

Manning's good bye is up there with Lou Gehrig's speech to the Yankees as one of the greatest retirement speeches of all time.