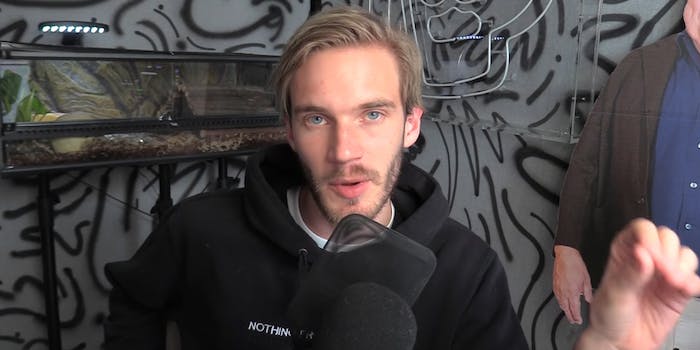 We all fell for it.

Contrary to his promise, YouTube‘s top-earning star PewDiePie did not delete his (main) channel on Friday at noon ET.

In fact, Felix Kjellberg, the man behind the channel, did us all one better and published a video on Friday morning busting the joke wide open. In the short video, Kjellberg thanked all the media outlets that covered the news of his threat for helping get him to 50 million subscribers.

Then it gets weird.

PewDiePie shows a screen recording of the deletion of an account, but the channel deleted is “Jack septiceye2,” which he originally created as a troll account to a separate YouTuber by the name of Jacksepticeye.

According to the PewDiePie wiki, he created the troll channel on Oct. 20 to make fun of his friend jacksepticeye, but only posted one video. The channel gained close to 1.5 million subscribers, but growth slowed after the first week of the channel’s existence.

At the end of the video, Kjellberg wrote he’ll definitely delete his channel at 100 million subscribers. So don’t worry, y’all. We’ll show him soon enough.

The week-long debacle began last Friday when PewDiePie published a video in which he took issue with several of YouTube’s business decisions, like changing algorithms and allegedly making his videos less accessible, and threatened to delete his channel once he reached 50 million subscribers.

“I feel like YouTube is like a toddler, playing with knives,” he said in the video. “And let’s just take the knife away from that baby.”

Kjellberg’s channel broke the mark less than a week later…

Again, with little result, because the man actually is, again, not deleting his YouTube channel. Oh, and he’s keeping the subs, too.

BRB, walking to the sink to wash this egg off our faces.