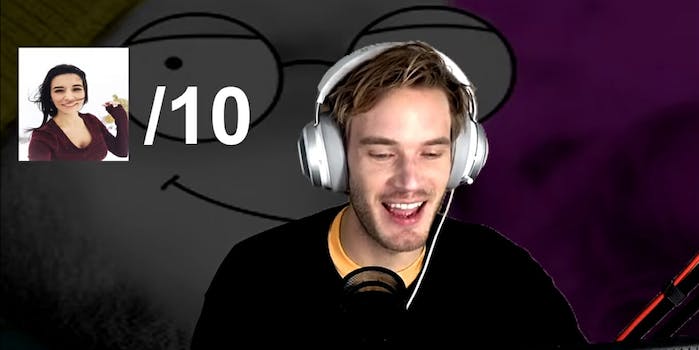 PewDiePie joined his editor, whom he refers to as both Brad2 and Sive1, for a review of the subreddit. In the video, PewDiePie announced his intent to gradually build his anger through the course of the filming. “Like, actually I’m pissed by the end of this,” he said. “That’s the goal.”

The shot at Divine came a few minutes into the video after Pewds and Sive got mildly worked up over a post claiming that Northface had stolen a photo from a user and used it on a shirt, without permission. “Now I’m infuriated,” PewDiePie said. “Now it’s personal.”

The casual shade actually came from Sive, rather than PewDiePie. Following the stolen photo post, Sive rated it “an Alinity out of 10,” to which PewDiePie laughingly responded “Alinity out of 10 everyone. I agree. That’s a perfect rating.”

From the get-go, PewDiePie and Sive strove to create their own rating system based on the content of each post. A post about capitalizing the “I” in the skull meme earned “six skulls out of five.” Another, about a wife leaving all lids only half screwed on, was awarded “a half marriage.”

The comment from Sive and PewDiePie’s reaction were both benign. But it’s his past with Divine that makes PewDiePie’s comment noteworthy as he and the streamer have been butting heads since mid-2018. The feud began when PewDiePie referred to a group of female streamers including Divine as “Twitch thots.” He wrote them off as attention-hungry people who are only making a name for themselves by being sexually provocative and aren’t real gamers.

Exchanges between the two went downhill from there. Divine questioned whether the PewDiePie video could be hit with a copyright claim, though she later admitted that she didn’t file one. PewDiePie apologized for using the negative term, but Divine didn’t accept his apology. She noted that whenever someone calls her a name like “thot” or “whore,” she receives an influx of harassment. Pewds use of the term to his massive base, she said, was a problem for her.

The disagreement didn’t stop there. PewDiePie, upset that his apology had been rebuffed, responded to Divine. He watched a number of her videos and then created his own, giving reasons that she has likely received criticism in the past. He primarily noted the way she dressed or acted on camera. “You’re just playing games with the shortest skirt ever, that’s our fault for looking at it in any sexual way, right,” he said.

PewDiePie is among many men who believe that Twitch gives preferential treatment to women on the platform. There are likely a number of people who abuse the platform’s algorithm, but female streamers, in particular, are blamed by gamer men for doing so. Despite some claims likely being true, the majority of these accusations come from angry male gamers who don’t appreciate women “invading” their space.