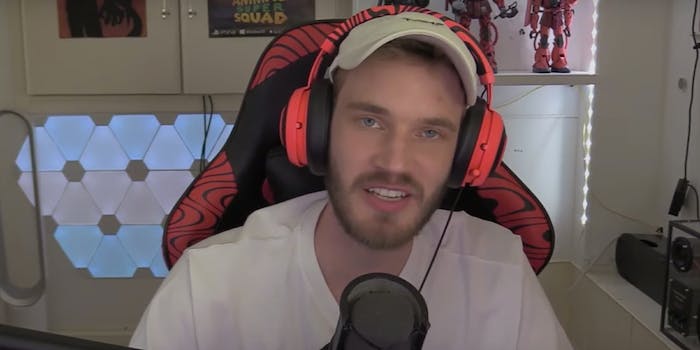 He said she shouldn't be surprised when she gets sexualized or harassed because of what she's wearing.

In his latest video regarding an ongoing feud with Twitch streamer Alinity Divine, popular YouTuber Felix Kjellberg—known online as Pewdiepie—told his viewers that Divine shouldn’t blame men for harassing her on the internet when she wears revealing clothing.

The feud between the two began earlier this month when Kjellberg tested the Tobii eye tracker—a tool that shows in real time what a user is looking at on the screen—by watching a video titled “SEXIEST TWITCH GIRL STREAMERS APRIL 2017!!! #2.” The compilation video features Divine, so when Kjellberg referred to the women in the video as “stupid Twitch thots,” she got upset.

In her own video, Divine visibly becomes flustered when Kjellberg calls the women “thots” and she runs off screen asking if she can file a copyright claim with YouTube against the video, because it uses content that she recorded without her consent. In a later video posted on May 19, Divine admits that while Kjellberg’s video was hit with a claim, she didn’t make one—she was just speaking out of anger because she “knew [she] couldn’t do anything about it.”

In the video, Divine explains that whenever a content creator calls her a name like “thot” or “whore,” her own channel gets an influx of harassment, as well. She said she was angry when she heard Kjellberg used his platform of 62 million subscribers to watch a video of female streamers and call them a derogatory term.

Meanwhile, Kjellberg apologized to Divine for calling the streamers thots and said in the future he’ll be more careful about the language he uses. But because Divine did not accept his apology, he said she was pushing a “victim narrative.”

“If she can’t accept that apology, what do you want from me? Like what else can I do? It’s like she’s so used to getting everything done her way and she just keeps pushing this victim narrative,” he said. “Like, ‘If I seem like a victim enough, maybe they’ll turn around eventually.’”

Kjellberg then launched into examples he found on her YouTube channel that he believes proves that she wears revealing clothing and does provocative things and therefore shouldn’t be surprised when she receives harassment. Some examples he cites include wearing a sheer top with her bra straps exposed, playing Just Dance in a dress, and eating a Popsicle while she’s on camera.

“You’re just playing games with the shortest skirt ever, that’s our fault for looking at it in any sexual way, right?” Kjellberg said in the video.

“I know you don’t portray yourself to be the smartest person, but I know you’re not that dumb to not be aware of what you’re doing,” he said. “Showing your underwear on screen? That’s our fault, right?”

But Divine, who has been streaming for more than five years, said in her own video that the behavior Kjellberg seems to be excusing has only been getting worse and has escalated to the point where men tell her she should kill herself or threaten to hurt her.

“It’s shifted from them [viewers] being perverts to just straight up calling me a whore,” Alinity told Vice. “They’re trying to control my body—people telling me how I should dress and how I should act. They’re trying to diminish my value by saying, ‘This is just what you are, and you should get out of here.’”

And Divine isn’t alone in these feelings. As Vice pointed out, a 2016 study of 1 billion comments sent on Twitch showed that in female streamers’ channels, the most-frequently used words were things like “boobs,” “hot,” “omg,” “smile,” and “babe”—while men mostly received comments using world like “melee,” “shields,” “glitch,” and “reset.” On Twitch, men make up 65 percent of streamers, according to 2016 statistics from social media analytics site Statista.

Divine believes that the gender statistic is so unequal because women don’t want to deal with the harassment that comes with streaming on YouTube.

“I can’t express to you how horrible it’s been,” she said. “I’m gonna be honest with you, if this wasn’t my job this would have pushed me off the internet a very long time ago. It makes me wonder maybe this is why women are so underrepresented on Twitch in general.”

Divine has since completely backed away from the feud—and judging by the tweets she’s received, it’s no surprise.

There is a lot of sexism in the industry you say? Maybe if you stopped forcing it by showing parts of your cleavage?

Uhh she needs to earn respect before we can show it to her, cause she unfairly copyright claimed a video that only showed a very short clip of her before he called the group of women rightly so "twitch thots" because they abuse the algorithm by showing off their bodies for views

She also apologized to the internet for behaving “irrationally” and “explosively” and took a few days off from streaming.