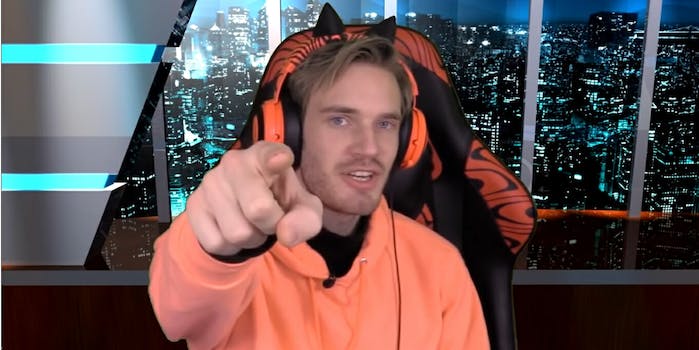 'Where do you draw the line on that?'

Felix “PewDiePie” Kjellberg is siding with YouTube in its most recent controversy.

The revelation that the video-sharing website is catching the occasional innocent creator in the middle of its targeted fight against pedophilic content has many YouTubers up in arms. PewDiePie uploaded a video addressing the matter over the weekend.

YouTube‘s decision to buckle down on content that could be harmful to minors comes after it promised to combat any videos and comments that could put children at risk. In an attempt to purge the site of any content endangering minors, the site is demonetizing or removing videos that could fall under the wide umbrella of “inappropriate content.”

The fact that a troll in the comments section could lead to a video’s removal is of particular concern to creators. YouTube’s king of content, however, said he supports the action. “This is obviously a swift and short-term solution,” Kjellberg said. He noted the channel Girls Couture Club, for example, which features several young women in activewear and bikinis. Many of the videos feature the girls modeling or doing yoga.

It is channels like this that led to YouTube‘s decision to crack down. Though the videos themselves are not inappropriate, it only takes a few commenters to turn things rotten. By sharing timestamps of moments in the videos in which, for instance, the girls are in compromising positions, commenters made straightforward content into something concerning.

He was clear that he considers this action by YouTube to be a necessary one.

“It’s not something that is going to affect everyone on the site,” he said. “It’s clearly something they’ve done just to act swiftly at a time where it’s necessary. And to be honest, I appreciate that YouTube does that.”

As YouTube told the Daily Dot last week, it deemed the sweeping crackdown necessary to fight loopholes in the comments section that made it easy for pedophiles to spread inappropriate content. It did not, however, respond to what it plans to do about trolls who harass creators—and impact their revenue—by potentially flagging channels they dislike as inappropriate.