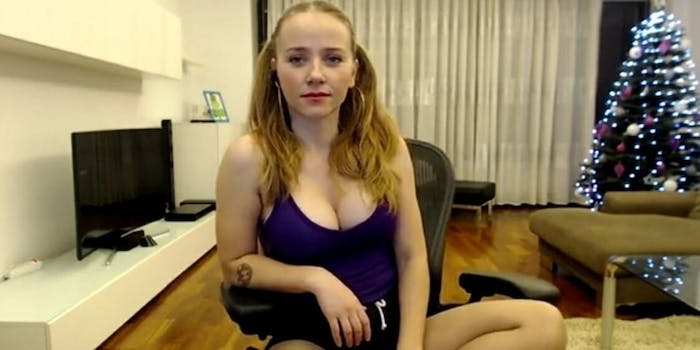 People have messaged the Twitch streamer's family members with a video of the incident.

When Twitch streamer Lucia Omnomnom accidentally went topless during a recent stream, she received a three-day ban from the site. Many Twitch users were upset at what they said was a light punishment and a “double standard,” and they’ve let the Romanian mother of two know about their displeasure.

Lucia returned to Twitch on Thursday after her punishment with a smile on her face, saying, “I’m doing great. I’m hyped to be streaming.” But behind the scenes, she told the Daily Dot she’s received plenty of harassment after she disrobed while her camera was still broadcasting.

“Yes, accidents happen,” Lucia wrote in an email. “… I [did] get lots of hateful messages, people messaging my family and friends sending them the video with the incident. They’re also saying it was on purpose just like all the other ‘Twitch thots’ do. I don’t get why, but I don’t bother either. It happened and that’s it; life goes on. No matter what you do or not do, there will always be people that judge you and talk shit even though they[‘ve] never seen you before and know nothing about you. They’re toxic people.”

Lucia doesn’t want to be seen as a so-called Twitch thot, the derisive and misogynistic name given to female streamers who are accused by men of using their sexuality to draw more viewers and subscribers to their stream. In this case, Lucia said her nudity was a complete accident after a full day of streaming to her subscriber base (she’s now followed by more than 26,000 people).

After she was finished streaming that day, she “raided” another Twitch user, which should have sent her audience to that other person’s channel. It’s something Lucia said she likes to do for less well-known streamers, because she said, “they’re always grateful and happy.” But some of her viewers stayed on her channel instead and saw Lucia, who had forgotten to close her broadcasting software, take off her shirt and bra. Then, somebody posted the clip on Reddit where it went viral.

Lucia was suspended for three days. But not only for the nudity, she said. Twitch, which did not respond to a Daily Dot request for comment on Thursday, also temporarily banned her for a variety of violations, including, in her words, “answering questions about wet dreams.”

Angry critics have said she was actually banned for only a day and then immediately received a Twitch partnership—which would increase her revenue—when she returned on Thursday. Lucia told the Daily Dot that none of that is true.

Instead, she’s simply taking her punishment from Twitch and the apparent harassment from others, and she’s continued on with her new career as a full-time streamer. As for those who have bashed her, Lucia had this to say on Instagram: “You’ll never get anywhere with this toxic personality. You’ll never grow, you’ll never be a great streamer. Accidents do happen and you should work on your plan instead of bashing others.”