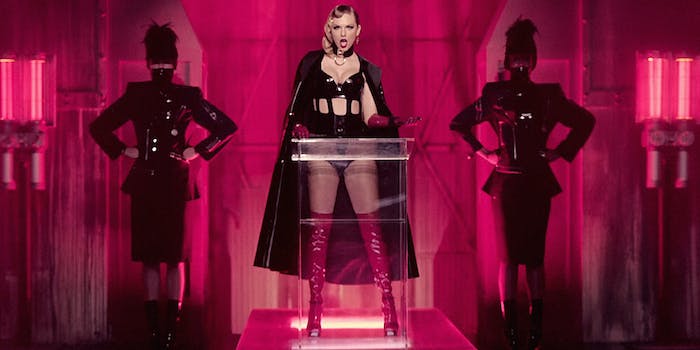 ACLU comes after Taylor Swift after she threatens writer with lawsuit

Look what you made the ACLU do.

The ACLU has stepped in to help a writer who received a cease-and-desist letter from Taylor Swift‘s legal team.

PopFront, a site that boasts “culture and politics from the Left Coast,” posted an editorial on Sept. 5 from editor Meghan Herning titled, “Swiftly to the alt-right: Taylor subtly gets the lower case kkk in formation.” The piece explores the connections, which have been pointed out by other publications in the past, between Swift’s music and the white supremacist movement. Specifically it looks at the lyrics and imagery of single “Look What You Made Me Do,” which have publicly been embraced by “alt-right” entities. It also called out Swift for not being open about her political beliefs:

And while pop musicians are not respected world leaders, they have a huge audience and their music often reflects their values. So Taylor’s silence is not innocent, it is calculated. And if that is not true, she needs to state her beliefs out loud for the world—no matter what fan base she might lose, because in America 2017, silence in the face of injustice means support for the oppressor.

On Oct. 25, according to the ACLU of Northern California, Herning received a letter from Swift’s attorney, which claimed her post was “baseless fiction masquerading as fact” and defamatory, and needed to be retracted and wiped from social media. Swift also threatened a lawsuit.

The ACLU holds that this is an issue of freedom of speech, and digital rights attorney Matt Cagle said: “Intimidation tactics like these are unacceptable. Not in her wildest dreams can Ms. Swift use copyright law to suppress this exposure of a threat to constitutionally protected speech.”

PopFront added in its own statement: “The press should not be bullied by legal action nor frightened into submission from covering any subject it chooses. Swift’s scare tactics may have worked in the past, but PopFront refuses to back down because we believe the First Amendment is more important than preserving a celebrity’s public image.”

The ACLU asked for a deadline of Nov. 13 to confirm Swift’s legal team won’t be suing. Reputation, Swift’s new album, is set to be released Nov. 10.