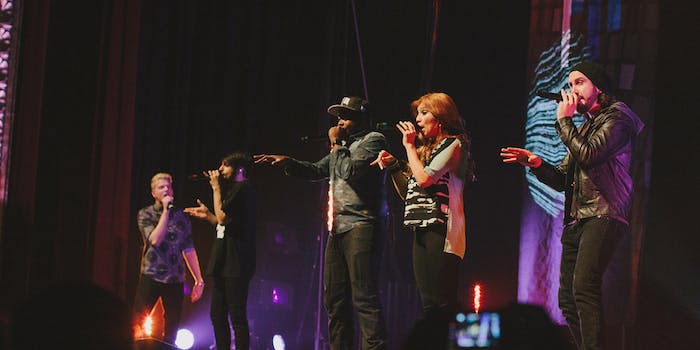 Pentatonix have taken over YouTube with their covers and their original songs ever since winning the third season of The Sing-Off, and now they’ve been cast in Pitch Perfect 2, according to Entertainment Weekly.

The five-member group will play a rival a cappella group to the Bardem Bellas, which included stars Anna Kendrick, Rebel Wilson, and Brittany Snow among others, as they go through another school year after winning a national title.

Pentatonix’s Scott Hoying stressed that while it’s obvious that he and the other members are in the film, they’re not playing themselves, and and fellow member Mitch Grassi promised fans that they’re “going to love it.”

Hoying, Grassi, Avi Kaplan, Kirstie Maldonado, and Kevin Olusola spent one day on set performing a song that they arranged themselves

“They gave us a song, and we arranged it and sent it back, expecting them to say, ‘You need to change this, this, and this,’” Hoying told EW. “But they came back and said, ‘Great, that’s it!’ That was really cool.”

The original Pitch Perfect movie sparked a growing interest in a cappella among fans (and “Cups” covers), and Pentatonix became involved thanks to fan tweets to producers and the efforts of mutual friends. Many members of the cast are also fans of the a cappella group.

Fans had an inkling that Pentatonix would be in the film after the group posted a photo to Instagram with the caption, “Some aca-awesome things are happening :)”

We’ll have to wait until 2015 to see the actual performance, but it’s sure to be aca-amazing.