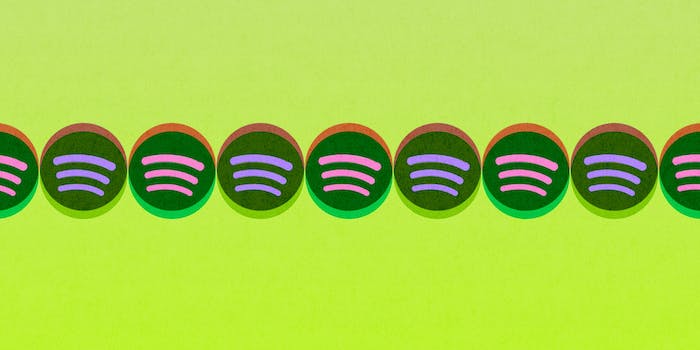 Music, music everywhere—but not a drop to bump.

Ah, the cruel irony of the streaming age: Music, music everywhere—but not a drop to bump.

When mankind’s entire discography is but a click away, where does one start? This crippling starting-line decision is probably why you’re one of the 3.8 million lost souls who bought Adele’s 25 last week.

To help with the dilemma, we’ve swapped notes and written strong pitches for why you should fold these Spotify playlists into your seasonal rotation. The object of the game isn’t to foam at the mouth with pretentious name-checks, but rather to provide directions to pleasant, captivating, ahead-of-their-time recordings.

Finding the perfect workout playlist is a quixotic task (although Kanye is always a safe bet to get you amped). But if you can forgive the bizarre, anachronistic inclusion of Selena Gomez’s “Come and Get It” and Sting’s “Desert Rose,” Spotify’s featured Bollywood Workout mix is the absolute best playlist wake up to for your sleepy 7am run. A.R. Rahman’s “Jai Ho”—from Slumdog Millionaire—bangs, but I’m a sucker for “Raanjhanaa,” the title track from the Bollywood hit starring Sonam Khapoor (she’s very popular in India). Other fun favorites include Miss Pooja’s “Second Hand Jawaani” (so many hand claps) and “In My City,” the will.i.am-produced track from Quantico star Priyanka Chopra. —Nico Lang

At more than 62 hours in length, Marvin Churchill’s “DJ Screw” is a completionist paradise of chopped and screwed projects from Houston’s late genre-evolving maestro. For the uninitiated, Screw (born Robert Earl Davis) recorded a series of basement tapes in the ’90s—literal mixes wherein he’d slow-pitch recordings and yield magnetic soundscapes of nostalgic, soulful doom. By ’93 he’d wrangled together a swashbuckling rap posse, the 12-deep Screwed Up Click, and lorded over a franchise of indie music shops strewn across Texas until his death in November 2000 from a codeine overdose. It’s a lot to unpack, so just start with 3 ’n the Mornin’, and blare Fat Pat gems like “Ghetto Dreams” and “25 Lighters.” —Ramon Ramirez

3) The Shangri-Las and the Girl Group Garage Sound

Spotify is to playlists what CD samplers used to be to music lovers back in the days of infomercials. While afternoon PBS programs in the mid-’90s really wanted us to listen to Anne Murray, they were incredible resources for audiophiles interesting in broadening their historical horizons. “The Shangri-Las and the Girl Group Garage Sound” keeps this legacy alive precisely because it originally was a CD sampler. It’s also an incredibly good one, with the Shangri-Las’ well-known hits (“Out in the Streets”) along with obscure gems. The Models’ “Bend Me, Shape Me” and “Jelly Belly” by Nai Bonet—about the joys of pole dancing—are both perfect ’60s kitsch and lightyears ahead of their time. I can’t believe they exist, but I’m so, so glad they do. —NL

Sometimes your roommate insists on tinging the cookout with a Caribbean theme. Suddenly the burgers boast decorative pineapples and he’s set a Pandora station to “reggae.” And then “Red Red Wine” comes on. Save yourself from this grotesque moment of privilege and take the hour-45 this installment requires to explore one of the most dynamic, vital, and soulful flourishes in music—one with dozens of subgenres that extend far beyond Bob Marley. Here we focus on Jamaican producers Lee “Scratch” Perry and Joe Gibbs. Perry is the Dr. Dre to Marley’s Snoop Dogg, and his Black Arc studio was a more experimental Hitsville. (He later reportedly burned it down because he feared evil spirits had taken over.) Between the two, some of the most pointed love ballads: the Heptones’ “Pretty Looks Isn’t All,” Cornell Campbell’s “I Will Never Change,” Mighty Diamonds’ “Shame and Pride,” and Barrington Levy’s “My Woman.” —RR

Bands like Dengue Fever have kept the legacy of Cambodian ’60s pop alive by blending it with modern sensibilities, but the originals are even better. The decade birthed psych rock superstars like Sinn Sisamouth, who was the country’s answer to Elvis Presley, and Ros Sereysothea, known as the “first lady of Cambodian rock.” Sereysothea’s “Shave Your Beard” and “Wait 5 More Months” appear on the playlist, but if you listen to one song on this playlist—or any playlist—make it “I’m Sixteen.” Sisamouth and Sereysothea’s careers were extinguished by the totalitarian Khmer Rouge—banning all music that was not explicitly nationalistic—and many musicians were killed by the regime. For more on the era, check out the documentary Don’t Think I’ve Forgotten: Cambodia’s Lost Rock & Roll. —NL

Like South by Southwest and CMJ, Reykjavík’s Iceland Airwaves festival has the core value of brandishing up-and-coming talent. And for all of the free tacos and horrible human beings you’ll find in Austin come showcase season, Iceland Airwaves boasts DJ sets held in thermal pools. (Don’t image search this thing unless you yearn for eternal FOMO.) Anyway my friend Harrison returned an enlightened disciple following the 2013 iteration, and this mix of Icelandic pop followed suit. It’s a dizzying rush of sparkling piano loops, broken English, falsetto wailing, the forward garage plucks of seven-piece rockers Grisalappalisa, the burrowing synth pop of Halleluwah, Emiliana Torrini’s anthemic wanderlust, and Samaris’s meditative coffeehouse angst. You have a full calendar year to prepare for the 2016 iteration, but in the meantime this playlist is a marquee score for office hours. —RR

If you’re the type of person who wishes you could celebrate Halloween 24/7, here’s your dream Spotify mix. The choices are admittedly all over the place (Evanesence, anyone?), but there’s a little something for everyone. Indeed, it might be the only playlist to ever bring together Katy Perry and the Boswell Sisters and offers up choice selections from an eclectic array of artists: Bat for Lashes, Daniel Johnston, Sufjan Stevens, TV on the Radio, Blue Oyster Cult, Julia Holter, Annie Lennox, and Screamin’ Jay Hawkins. While I always appreciate a little Kate Bush love (“Hammer Horror”), my favorite oddball pick has to be the theme from Twin Peaks: Fire Walk With Me. I want to find whoever made this playlist and personally shake their hand. —NL

Due to a resurgence of interest in the ’20s after Baz Luhrmann’s remake of The Great Gatsby, there’s no shortage of good playlists for aspiring flappers. My favorite is the generically named “20s Music.” Although the Spotify-approved “Taste Remind—the 20s” is a nice sampler of music from the period, you could spend all afternoon listening to this playlist—and you just might. The mix starts off to a spirited start with “Washington Squabble” by the Claude Hopkins Orchestra and the great Eva Taylor’s “Baby, Won’t You Please Come Home?” Other standouts include ”How’s Your Uncle?” by the Troubadours and “Oh Gee, Georgie” by Margaret Young, which will make you wish you knew how to Charleston. —NL

The Earth-rotating soul of the ’60s in places like Muscle Shoals, Alabama, was doing just fine. Of course simultaneously, the Beatles bathed across India and returned awake enough to tinker with souvenirs. While the Western world patiently tolerated George Harrison at his most ponderous (“Love You To,” “Within You Without You”), all the R&B cool kids were dropping sitar solos on “Signed, Sealed, Delivered” and “Chain of Fools.” And that’s where our journey begins. Of note: SITAR&B is an in-house production from a few years back. It’s a trusted banger, and if you like that one, the Daily Dot’s Spotify archives are padded and nerdy. Follow us. —RR