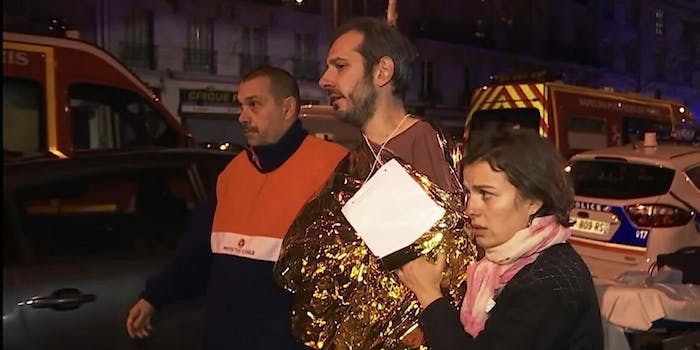 ‘November 13th’ is one of Netflix’s best documentaries

With November 13th: Attack on Paris, Netflix has delivered another outstanding documentary. Over the course of three hours, November 13th takes viewers across Paris as a high-coordinated terrorist attack unfolded. The attack started outside the Stade de France during a friendly soccer match between France and Germany. From there, four different restaurants were targeted, before the attack hit the Bataclan theater. All told, 130 people died and over 400 others were injured.

November 13th retells the events of that night in the words of the people who were there. There are interviews with survivors, as well as the first responders and higher-ranking government officials who navigated the crisis. Directors Jules and Gedeon Naudet mix establishing shots of each location with live footage from that night. It’s as close to a recreation as you can have in non-fiction. The approach is both breathtaking and soul-shaking. There is a moment in the third hour where police, seemingly out of options, prepare to make a move on the attackers inside the Bataclan. The film cuts from an interview to a shot taken outside the venue and sits there as the assault plays out in real time. It lasts only 76 seconds and isn’t graphic (we only see the outside of the building), but it’s deeply unsettling.

I doubt I’ll see any single moment in a movie this year that rivals its sheer power. And November 13th is full of moments that make a similar impact.

Elsewhere we see a photograph of one terrorist outside a restaurant, taken by a man who lived in an apartment above the restaurant. There are the accounts of people who saw the terrorists up close. Like the man in a café outside the soccer stadium who was in line when the first blast shattered the night. Memories from that night, like a bloodstained happy hour sign or rooms overwhelmed by the ringing of unanswered cell phones, are open wounds that the survivors are clearly still struggling with.

When Caroline, a Bataclan survivor, recounts her journey, you can hear the anger in her voice as she refers to the terrorists as “jerks.” Other survivors express similar sentiments, and their emotions are palpable, and so is their futility. Whereas the responders and officials were able to focus on the job at hand to gain some distance, the people caught in the crosshairs had no recourse. It hurts watching the survivors try to reclaim the part of themselves they lost that night and knowing that it’s not coming back. It makes the dehumanization of random violence tangible. But just enough time has passed that the survivors are able to provide surprisingly even-handed testimonials. Emotions break through, but for the most part, everyone handles themselves well. It’s inspiring in its own right.

This happened barely two-and-a-half years ago, and with it being so fresh in the minds of many, it’s fair to ask why anyone would want to relieve this horror. The reason to watch November 13th, aside from its impeccable craftsmanship and incredible insight, is for the stories of survival and humanity that kept hope alive for so many. It’s staggering to hear first responders recall scores of wounded people downplaying their own injuries so that their neighbor could receive treatment first. There are so many instances where an interviewee recalls a small moment of grace, something that brought them peace or hope. While November 13th makes it clear that the ripples from that night are still being felt, it ends by focusing on the resilience of the people who were there that night, as well as Paris itself.

November 13th is a tough watch, but I highly recommend it. The documentary is broken up into three parts. The first covers the initial attacks, while the second and third episodes cover the Bataclan and the aftermath. It makes a good companion piece to HBO’s Eagles of Death Metal: Nos Amis. That film covered the Bataclan attack through the perspective of the band onstage. The documentary, directed by Colin Hanks, came together quickly in the aftermath. It debuted 15 months after the attack and it’s emotionally raw, but it also opted to avoid some of the thornier aspects of the band’s, particularly frontman Jesse Hughes’ pro-gun politics and anti-Muslim comments.

Where Nos Amis presents a hyper-focused story, November 13th broadens its scope to give a comprehensive view of something that shook the world. Aside from the minute-by-minute accounting of the night, November 13th puts into perspective the magnitude of the attack and response. It is a clear-eyed look at something most people would rather avoid, and that is where its power comes from. In the streaming queue of Netflix’s best docs, like Icarus, Strong Island, Making a Murderer, The Keepers, or Wild Wild Country, November 13th is as good as any of them.