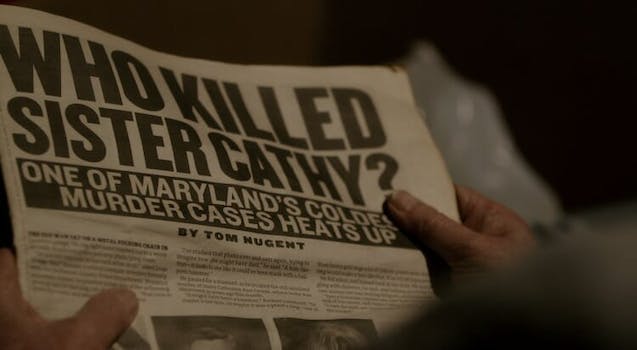 ‘The Keepers’ is the latest captivating true-crime story for Netflix

The murder of Sister Cathy Cesnik went unsolved, due to a massive attempt to cover up allegations of child abuse and sexual assault.

There’s an underlying question running through most of Netflix‘s true-crime documentary series The Keepers. When we finally get there, the doc shifts from a fascinating cold case to an overwhelming tragedy. That pivot also elevates an interesting and engaging mystery into a walloping condemnation.

On Nov. 7, 1969, in Baltimore, Sister Cathy Cesnik was abducted. Her body was found nearly two months later. Nearly 50 years later her case remains open and unsolved. Over the course of seven hours The Keepers explores a handful of possible (likely?) culprits. The show asks, flatly, “who killed Sister Cathy?” But the real question of the show is “why was Sister Cathy killed?” With most of the main players in the story dead or off the grid, Cathy’s killer will likely never be confirmed. Director Ryan White (The Case Against 8), working with two of Sister Cathy’s former students (Jean Wehner and Teresa Lancaster), covers the case as thoroughly as possible, and even appears to surprise the case’s current detective with their information.

But Sister Cathy’s murder is just the tip of the metaphorical iceberg. The more we learn about Sister Cathy, the more we learn about a substantial cover-up at play. Cathy taught at the all-girls Archbishop Keough High School. She found out about students who were being sexually assaulted by two of the school’s priests. Before she could expose the truth, she was murdered. And with that the priests, including Father Maskell and Father Mangus, were able to continue their rampage unabated.

The Keepers starts in a dark place, and gets darker as it sheds more light on the failings of the Catholic Church. But The Keepers is about Jean Wehner and Teresa Lancaster just as much as it is about Sister Cathy. Wehner and Lancaster are linked by more than sharing a teacher—the women were two of Father Maskell’s victims. Their decision to come forward with allegations against Maskell in the mid-’90s helped jolt the long cold investigation. Through Wehner and Lancaster, The Keepers is also a treatise on the survivors of unspeakable crimes.

There are many developments in Sister Cathy’s investigation that will floor you, including the revelation that Maskell showed Sister Cathy’s corpse to Wehner to scare her into silence. Or the face-to-face interview with one of the case’s strongest suspects. These moments will satisfy true-crime fans and propel viewers through the documentary’s seven episodes. The Keepers is comprehensive in its coverage of the crime and its aftermath. But it’s the other aspects of the story that make it essential viewing.

While the documentary doesn’t shy away from the ugliness at the story’s core, it also finds moments of lightness. Hugs between survivors, shared memories of better days, and even a brief shot of a dog walking toward the camera brings levity. These moments of the better side of humanity are life jackets—something to be cherished, a quick distraction from harsher truths.

Then come the final 40 minutes. White expands the show’s scope to cover some of the legal fight to hold the Catholic Church accountable. For anyone who has read about this subject, the outcome will be unsurprisingly infuriating. But somewhere in there is enough perseverance to keep you from complete despair.

The Keepers features many talking heads, but White goes to great lengths to make the show visually interesting. Between on-screen graphics, gorgeously shot reenactments, and interludes, The Keepers is visually engaging in a way most documentaries are not. The mix of styles makes The Keepers feel fresh, even as it tells a story as old as time.

If you enjoyed Netflix’s Making a Murderer, you owe it to yourself to watch The Keepers.