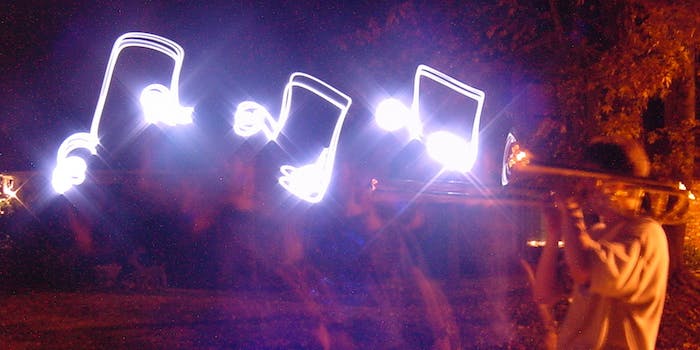 The best way to learn music is by using an app

You need to hear this.

If you’ve ever embarked on the adventure that is learning how to read music, you’ll understand the process involves a lot of books, dusty piano teachers, and a fair bit of money spent to understand the minutiae of each note on the Hexatonic scale.

Up until now, the cheaper alternative had been to either (A) be born a genius or (B) jump on ultimate—guitar, read tabs, and maybe progress to being able to play the same three songs by Green Day, Oasis, and Radiohead. But those days could soon be long gone. A new music learning game called Meludia wants to make the music experience easier for beginners and experts in the field of music. How? It throws complicated squiggles and repeated renditions of “Für Elise” to the side and replaces them with an experience similar to synesthesia—featuring colors and evolving shapes.

Essentially, Meludia aims to teach people through emotional response rather than boring them with musical jargon. For example: one section involves guessing if a note is higher or lower on a scale —which is a simple way of learning the actual tones of notes—and another helps figure out what specific notes make up each chord. The tasks start easy—but they advance too. The top—tier levels employ obscure time signatures, help find out the discordant notes which are music’s out of touch cousins, and have, apparently, stumped even the most hardened musos.

I talked to Paul from Meludia about how people should learn through emotions and why the app aims to teach people from pro to poser a lesson about music.

Noisey: What made you want to set up Meludia?
Paul: Despite the fact that music is one of the rare universal traits of human societies throughout space and time, we have come to think of music as an innate gift that only a few people possess. Meludia aims at revealing that anyone can become a musician.

Photo via jasoneppink/Flickr (CC BY 2.0)