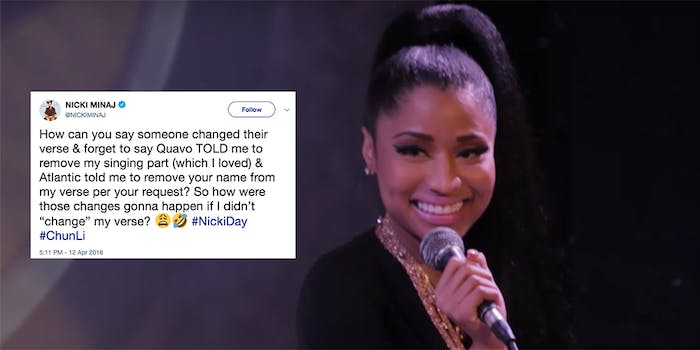 Here's all the drama from #NickiDay.

To celebrate the release of two highly-anticipated singles from New York rapper Nicki Minaj, fans hailed Thursday as #NickiDay. But the debuts of “Barbie Tingz” and “Chun-Li” didn’t come without a couple of controversies.

First came the revival of old rumors surrounding Nicki and Cardi B. Complex reported that simultaneous to the new singles, an “expertly timed leak” posted by DJ Akademiks of Migos’ “Motorsport” revealed that Nicki had originally included Cardi’s name in her verse.

STOP THE PRESS. DJ Akademiks just playing Nicki’s ORIGINAL Motorsport verse & SHE ORIGINALLY SHOUTED CARDI OUT before she felt like Cardi was taking shots at her. WOW pic.twitter.com/BcVc4gw6Ui

The drama surrounding the verse goes back months; in November, Cardi B said Nicki’s initial verse on the Migos track was different than the final version. And the leak confirms that Nicki originally rapped Cardi’s name instead of Quavo’s. Here are the lyrics from the leak:

I’m with a couple bad bitches that’ll rip the party
If Cardi the QB, I’m Nick Lombardi
Pull up in the space coupe, I done linked with Marty
I can actually afford to get a pink Bugatti

People have been speculating about reasons for the change all along, with some believing that Nicki was intentionally dissing Cardi. But Nicki’s now saying she removed Cardi’s name at the request of record label Atlantic.

Both rappers have tried to clear the air of any bad blood, and Cardi had called any rumors of beef between her and Minaj “made up.” But Nicki recently told radio DJ Zane Lowe that Cardi “hurt [her] feelings” with her reactions to the rumors.

“I remember when I first came in the game, I would only be singing their praises and saying thank you,” Nicki said. “The first interview she did, it just hurt me because she looked so aggravated and angry. She just kept saying she didn’t hear it… I was like, what?”

Where's the cultural appropriation crowd at? Ya'll should be screaming https://t.co/XB1au8un8m

The criticism seems mostly far-sighted and assumes that taking inspiration from a character is the same as appropriating clothing, hairstyles, traditions, or mannerisms from a particular culture, which it’s not. By the book, the definition of cultural appropriation is “the act of taking or using things from a culture that is not your own, especially without showing that you understand or respect this culture.”

To be fair, as Kotaku pointed out, there is a bit of a disconnect in Nicki’s interpretation of Chun-Li, who isn’t the “bad guy” or luxury label-obsessed villain Nicki portrays her to be in her lyrics. But still, Nicki’s outfit on the cover art is more of a subtle nod than an outright lift from Chun-Li, and in her lyrics, she name drops the character as a reference the same way she name drops the X-Men and Lara Croft.

Plus, if it’s any comfort, Street Fighter developer Capcom is totally on board with the rap.