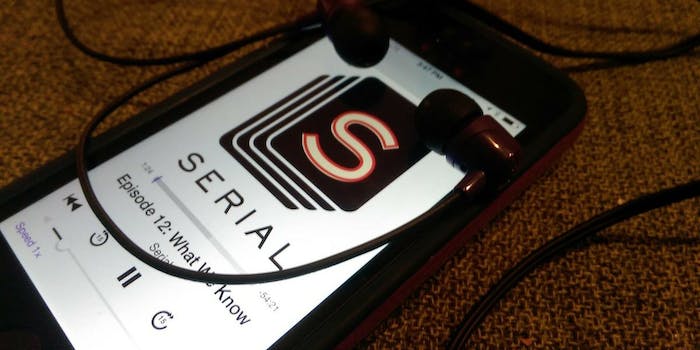 Although Serial’s second season isn’t set for release until later this fall, and season 3 is set for spring, we may already know what one of them will be about.

Maxim reports that the hit podcast will cover the story of Sgt. Bowe Bergdahl, the soldier held captive by Taliban insurgents in Afghanistan for four years and 11 months. But after his return, he was charged with desertion and misbehaving before the enemy.

According to multiple sources, who spoke to Maxim “exclusively” under condition of anonymity, producers of Serial, including host Sarah Koenig, were spotted at Bergdahl’s preliminary hearing at Fort Sam Houston in San Antonio, Texas. Additionally, Maxim reportedly spoke with two former members of Bergdahl’s unit who claim to have been interviewed by Serial producers.

Zero Dark Thirty writer Mark Boal was also said to have been at the hearing with Koenig.

Bergdahl’s former unit members expressed doubt that Koenig would cover this story without bias, however. “Anyone who tries to benefit from Bowe’s situation has little interest in the truth,” one anonymous source told Maxim. “What happened in 2009 is both troubling and politically incorrect… my concern is that the truth is being diluted by those looking to gain from Bowe’s story.”

“I get it that Boal wants to make a movie and Serial is trying to make a nifty diorama for hipsters to marvel at,” another said, “but I think it’s the height of crassness for them to do this when it could potentially affect the legal proceedings… I assume it will be a great way to paint us as kooks and sore losers.”

When Maxim reached out for comment, Emily Condon, a producer for both Serial and This American Life responded:

“We’d very much appreciate if fellow journalists would give us some room and not feel the need to attempt to dig into and try to figure out what you think we might be doing, especially since we’re actively reporting stories, and having a bunch of wild speculation out there makes our job reporting harder. Doesn’t feel very menschy. In any case, here’s what I can tell you: The Serial staff is currently working on several things simultaneously: Season 2, Season 3, and some other podcast projects. For now we’re not talking publicly about anything that we’re working on.”

Serial garnered critical acclaim for its first season which examined in grave detail the case of Adnad Syed, the Baltimore teenager, now 35, who was convicted of murdering his ex-girlfriend, Hae-Min Lee, in 1999. Koenig’s exhaustive investigation raised significant questions about the prosecution against Syed, who’s serving a life sentence. In August, Syed’s lawyers filed a motion in court showing that cell phone records that were integral to convicting the teenager may not be considered “reliable information” and could result in the court reopening the case.