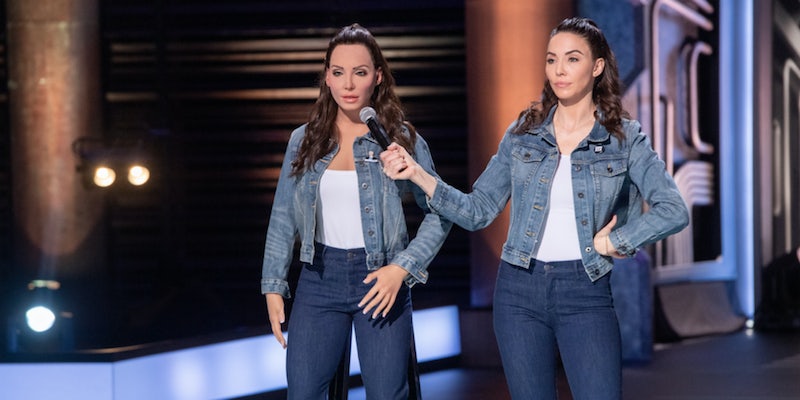 Whitney Cummings talks #MeToo and debuts her sex robot in ‘Can I Touch It?’

Whitney Cummings is “evolving” in her latest standup special. She knows that “generalizing about men and women did pay for my house,” but she’s trying to reach beyond the comfort zone.

Whitney Cummings: Can I Touch It?

RELEASE DATE: 7/30/2019
DIRECTOR: Marcus Raboy
STREAMING: Netflix
Cummings comes face to face with her double for a fresh spin on the hour special.

“Evolving” can mean a few things in Can I Touch It?, Cummings’ fourth standup special (and first for Netflix). She gets right into commentary on #MeToo and sexual harassment, calling out men who claim they don’t know how to behave in the workplace now that people are actually listening to women. Cummings, who helmed 2 Broke Girls and Whitney, looks back on getting harassed at work and takes responsibility for just laughing it off. She also knows her dedication to animal advocacy can make her an asshole to humans.

Cummings delivers all of this with energy and urgency; her performance style is animated, but she’s also trying to get your attention. Some of her advice for avoiding predatory men isn’t applicable to real life—”out-weird your attacker” probably only works in sitcoms—but she calls out things that women tend to overlook or apologize for, because harassment starts so early we learn to normalize and internalize it.

Her evolution accelerates in the second half of the special, when she brings out a robot version of herself, complete with matching outfit. She’s assembled her sex-robot double to see if robots could ever fully render humans useless, but along the way she discovered its practical uses, especially for women. She’s also developed a bond with robot Whitney. In a making-of segment, Cummings tears up when she finally sees the robot’s face, comparing it to “seeing my child for the first time.”

The comedian has a lot of thoughts about this tech, which pivots Can I Touch It? in a more TED Talk-y direction: Robots might make men appreciate women more, something Cummings realized after monitoring conversations in a chat room for sex-robot owners. Men are also making unexpected choices about their robot’s anatomy, suggesting an evolution in that area. And, she posits, they could help teenage boys learn about consent.

Cummings told the Daily Beast that the sex robot material stemmed from trying to find something “edgy” to talk about, and having a sex robot doppelgänger is certainly a selling point for a standup special. (I would have stuck around for even more outtakes from the robot factory.) It does take viewers out of the standup mind frame for a bit, but that’s not a bad thing. We get to see and hear audience reactions and gauge where they are; one woman asks why the robot isn’t wearing an engagement ring like Cummings. It’s an engaging spin on the traditional standup special, even if robot Whitney is still working on her delivery.