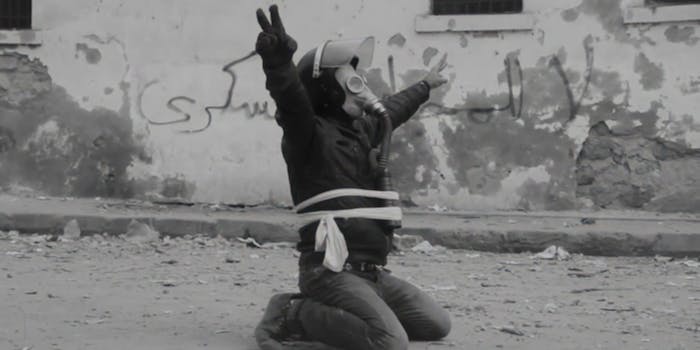 Netflix acquired the rights to The Sqaure in November.

The 2014 Oscar nominations came down the mountain today, and as a mirror of the Golden Globes, the major categories are fairly similar. What’s notable is that a Netflix film landed its first nomination: Jehane Noujaim’s The Square, for Best Documentary Feature.

In November, Netflix acquired the rights to The Square, a documentary on Egypt’s violent 2011 protests in Tahrir Square. The film—which was a hit at Sundance and the Toronto International Film Festival last year—will officially be released for streaming on Jan. 17, as well as in select theaters. Screenings in New York City and Los Angeles in 2013 were financed independently before Netflix picked the film up for wider distribution, showing how influential the company has become as a taste-maker—and at getting eyes on projects that might otherwise fly under the radar.

Netflix’s chief content officer, Ted Sarandos, ruffled some feathers during a keynote speech at the Film Independent Forum last fall, when he suggested theater owners should collaborate with Netflix and open bigger films on the same day they begin streaming. “I’m concerned that as theater owners try to strangle innovation and distribution, not only are they going to kill theaters–they might kill movies,” he added.

House of Cards has been the main Netflix series on a roll this year, winning three Emmys last fall, and a Golden Globe last Sunday. This documentary acquisition could make it a hat-trick for the company, in terms of awards. This might have been on their mind when they picked up the film.

The Square has some admirable competition in the Best Documentary Feature category, including the acclaimed Errol Morris and Werner Herzog-produced The Act of Killing, the SXSW hit 20 Feet From Stardom, Jeremy Scahill’s war expose Dirty Wars, and art doc Cutie and the Boxer.