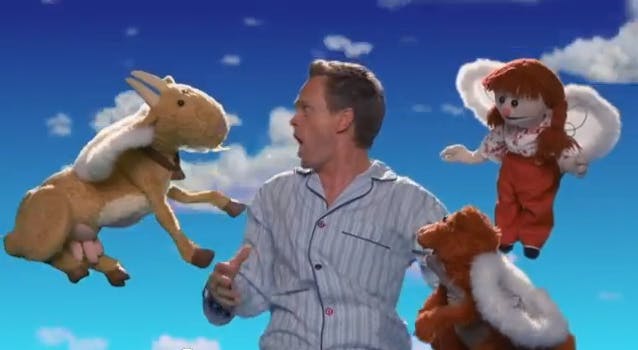 Neil Patrick Harris has a rare ailment: he dreams in puppets.

Neil Patrick Harris has a rare ailment: he dreams in puppets.

At least, that’s the concept for his new Web series, Neil’s Puppet Dreams, which premiered on the Nerdist Channel on Tuesday. Nerdist, one of Google’s 100 original-content channels, has already released a number of shows including Try This at Home and a video version of Neil DeGrasse Tyson’s Star Talk.

A preview for Neil’s Puppet Dreams, released last week, gave an inside look at the production of the show and painted a growing tension between Burtka and the puppet costars:

This isn’t an your average children’s show.

Harris, a lifelong puppet enthusiast and Henson fan who turned part of his garage into a puppet workshop, was originally approached by Nerdist’s Chris Hardwick with a general idea.

“He was looking for content for his [YouTube] channel and he sent me an email asking if I’d be interested in doing a show that was involving a collaboration with the Jim Henson puppets,” Harris told Entertainment Weekly. “And that’s kind of all you need to say to me.”

In the first episode, Harris and Burtka attempt to put their children to bed before Harris passes out from narcolepsy. Even as a puppet, Harris dreams of falling to his death. The puppets sing him a lullaby to slow the impending crash, where his “insides will be outsides.”

The show, filmed over a period of two and a half days, is a perfect fit for the Internet, NPH says. “[Hardwick] gave us this kind of free rein to come up with anything we wanted.”