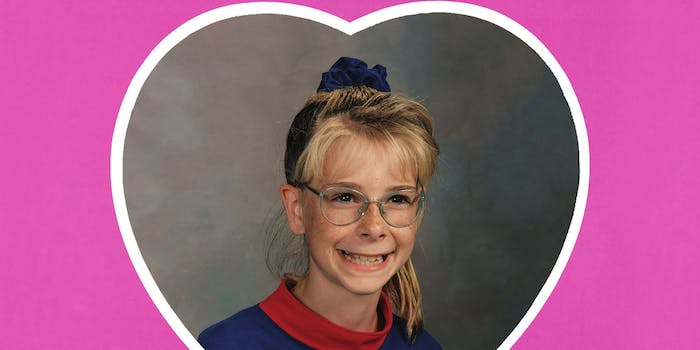 Dawn Luebbe harnessed the power of pageviews and landed a book deal.

Anyone who’s stumbled upon an old diary in their parents’ basement knows rummaging through childhood mementos can inspire both serious cringing and riotous laughter. But not everyone turns those moments into a Tumblr that leads to overnight Internet stardom and success.

Dawn Luebbe had just such an experience last year. Luebbe, an L.A.-based comedian who features in the IFC Comedy Crib/UCB Comedy webseries Rage, discovered a treasure trove of old diaries during a holiday visit to her hometown of Lincoln, Nebraska. The entries were so amusing that when she read them aloud at dinner, her husband urged her to put them online for old friends to see.

“I did not anticipate the response,” she told the Daily Dot.

Luebbe’s Tumblr, which she imagined would amuse a few former school pals, became an overnight phenomenon. The Daily Dot’s own Miles Klee ran a story, which got picked up by several other outlets, and within a week the Tumblr was at 3 million views.

Luebbe was stunned by the momentum. “Nothing else I’ve done in my life has gotten this kind of attention,” she said. She harnessed the power of pageviews and soon landed a book deal.

My 1992 Diary is an appealing pink gift book with a kitten gracing its cover. Inside, you’ll find Luebbe’s entries scrawled in charming bubble letters accompanied by self-deprecating essays that are sure to resonate with any child of the ’90s. Or anyone who has ever wanted to be cool and taken his or herself a little too seriously.

So what’s it like to have your younger, less-than-cool self become an overnight Internet celebrity? For Luebbe, it’s been amusingly cathartic.

“[It’s funny] how seriously I took the most minor events,” she explained. “I was pretty lucky to have a happy, carefree childhood. So even the most minor events were cause for drama and panic. …Having leftovers for dinner or [the boy I liked] not looking at me at recess sent me into tears.”

As a young girl, Luebbe spent much time agonizing over a boy named Dan. Although she was careful not to use his last name, friends who got wind of the Tumblr made it their personal mission to identify him. They were successful and Luebbe and her former crush reconnected.

“I was terrified at first that he would be upset… or really creeped out by me,” Luebbe said. “But luckily he was a good sport. He was even nice enough to supply me with a picture of himself at that time for the book.”

Aside from unrequited love, Luebbe’s entries also deal with her love of pop culture. She was enthralled by Beverly Hills, 90210, had a collection of troll dolls, rocked out to Amy Grant hits in church, and obsessively retold WWF happenings for her weekly current events homework.

Whether you’re a child of the early ’90s or simply a fan of the era, Luebbe’s entries are an enjoyable visit to a sillier time when we thought we were cooler than we were, and probably took ourselves a bit too seriously.