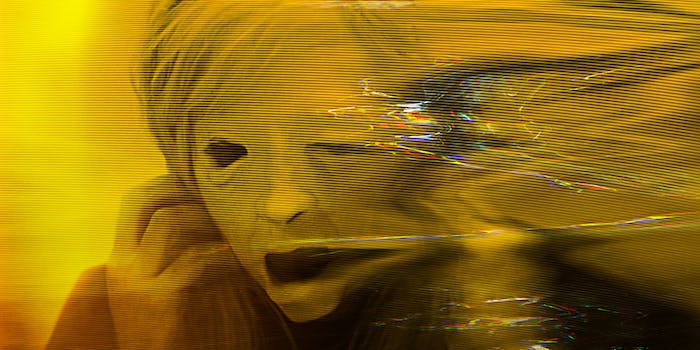 Gruesomely bloody and conceptually disturbing, Brandon Cronenberg’s new sci-fi/horror movie Possessor is not for the faint-hearted. Andrea Riseborough stars as Tasya Vos, an assassin who uses near-future technology to implant her consciousness into other people’s brains. Once inside, she uses their body to commit a murder in plain sight, before killing off the host and returning to her own body. A perfect, untraceable crime.

Like Leigh Whannell‘s cyberpunk thriller Upgrade, this movie draws clear parallels between its fantastical concept and real-world technology. Tasya Vos is essentially a drone operator; a killer whose body stays safe while she performs violent acts at a distance. Of course, Vos is a specialist rather than a footsoldier, praised by her boss (Jennifer Jason Leigh) for her standout talents in the field. Neither of these women express moral qualms about their work, either toward the murders or the method itself, which necessitates the violation and death of a second victim. But even if she’s fine with killing people for money, the experience still takes a traumatic toll on Vos, who grapples with intrusive flashbacks once she returns to her own body.

Inviting unavoidable comparisons with the director’s father, David Cronenberg, Possessor features plenty of body horror, avoiding the idea of a clean psychic transfer from one body to another. The process is very physical. In order to control someone’s mind, a metal rod must be inserted into their brain. This is actually our introduction to the film, in a nail-biting sequence starring Gabrielle Graham. And whenever Vos transfers her consciousness into a new host, she envisions her original body melting like a candle, subsumed into her new identity.

Although Vos passes the psych evaluation after her latest mission, her behavior is far from reassuring. She’s twitchy and uncertain on her way home to a startlingly average-looking house in London, where she has dinner with her husband and son. Dissociating mid-conversation, she imagines that she’s stabbed her husband in the neck. When she goes to check on her son in bed, we wonder if she’s really safe to be around children. But despite all this, Vos is keen to return to work—a job that she doesn’t necessarily enjoy, but where she’s conditioned to succeed within a certain set of parameters.

Vos’s next mission requires her to impersonate Colin Tate (Christopher Abbott), the fiancé of a wealthy heiress (Tuppence Middleton). We don’t get to know him as a person, because for the most part, Abbott is playing Vos in Tate’s body: convincing enough to fool Tate’s friends, but weird enough that they notice something’s wrong. That’s an acceptable risk for Vos, because if “Tate” is seen behaving erratically before he commits a murder, that just makes the crime more plausible. The real problem is the lack of compatibility between Vos and her new host, as Vos rapidly begins to lose control. Soon she and Tate are vying for sovereignty over his body, both falling apart at the seams.

With its careful balance of gore and creeping dread, Possessor relies on grounded performances from Riseborough and Abbott, guiding us through a stylish thrill-ride to a shocking finale. The sheer volume of blood, pain and cruelty means Possessor will mostly be enjoyed by fans of extreme horror, but it also stands alongside more cerebral sci-fi dramas like Under the Skin.

Possessor is out in U.S. theaters and will be released on VOD on Nov. 2.