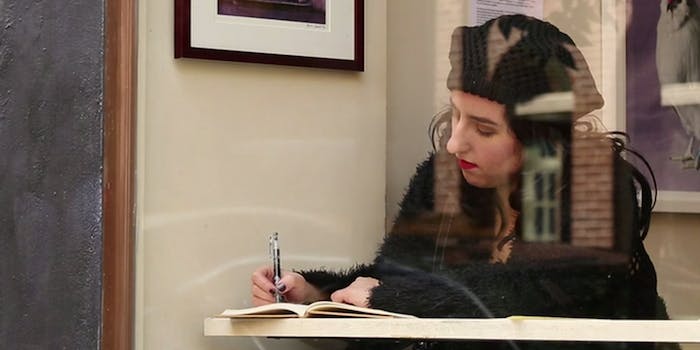 'Monica' in the city.

Last year, Monica Lewinsky slapped the Internet awake with an exclusive Vanity Fair piece, in which she told her side of a story that’s followed her for more than a decade. Many people only know Lewinsky as the woman who had an affair with then-president Bill Clinton. He was allowed to move on and continue his career; she was one of the Internet’s first victims of slut-shaming and, more recently, the subject of a grammatically incorrect line in a Beyoncé song. And so it goes.

A new six-part webseries, simply titled Monica, imagines her life post-scandal in New York City circa 2001, as she attempts to live a normal life. Co-writer Lily Marotta plays Lewinsky with deadpan grace, sporting the beret Lewinsky sought to “burn” in her Vanity Fair piece. Though the series features several NYC comedians, there are moments that are somewhat heartbreaking, like when a vague acquaintance calls Marotta a whore after running into her at the park. Alternately, the scene with her yoga teacher in episode 1 is a subtle stab at physical comedy.

Doron Max Hagay, co-writer and director of the series, says the idea came from another cultural text.

“The concept for the webseries came about last year after I stumbled upon a clip from Monica in Black and White, a documentary that Monica Lewinsky produced with HBO, which aired in 2002, that I had never seen or heard of before,” he told the Daily Dot. “I was so mesmerized by the spectacle—it reminded me of the Max Ophül’s film Lola Montès, which, in case you don’t know the film, it’s essentially about an actress who has sold herself and her story to the circus. On a purely aesthetic level, the documentary completely seized my imagination. As I continued to watch, I became completely absorbed and emotionally invested in Monica’s story.”

Hagay says a friend introduced him to Marotta, who’d already embodied Lewinsky in a 2008 short film, Monica’s Day Out, which explored her days before the White House.

“Lily pointed me to an article called ‘Monica Takes Manhattan,’ published in New York magazine in 2001,” Hagay said. “The banalities in that article offered an entry point into a story that might have otherwise taken us to Washington D.C. or Beverly Hills—places we didn’t have a budget to get to. It was a very reasonable world for us to recreate with our non-existent budget. The webseries is a very loose adaptation of that article and what we imagine producing the documentary was like for her.”

The series creates a somewhat dramatic rendering of Lewinsky. There are no real laugh-out-loud moments; the humor is subtle, and it was also important to make her seem like a human being with her own voice.

“An interesting challenge that presents itself when representing Monica Lewinsky is that there are humorous things about her which seem impossible to ignore, characteristics that make it easier to see her as a joke or vixen,” Hagay explained. “It’s these aspects of Monica that we try to both represent honestly and passionately critique. It’s important to us that the film engage audiences on an intellectual level, but also that it operates on an emotional level. We feel Monica’s story should invite empathy. On a formal level, I see Monica as a dramatic archetype, which is exciting for me as I experiment with film narrative.”

So why does the Lewinsky story endure, nearly 20 years later?

“One theory I have as to why her story endures is that it all remains a kind of unsolved mystery,” Hagay said. “We never figured out how to talk about Monica because no one knew what it was all actually about. But it’s all there: sex, power, greed.”