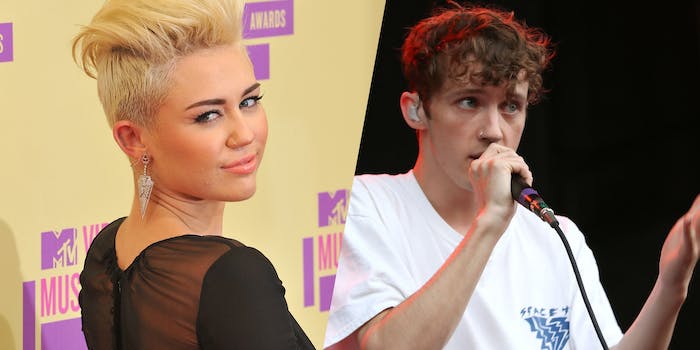 Miley Cyrus shouts out Troye Sivan for ‘being brave’

YouTuber and musician Troye Sivan has already won over Taylor Swift and Adele. Now add Miley Cyrus to the list.

The 21-year-old Sivan, who is openly gay, recently told BuzzFeed that Cyrus was the first LGBTQ figure who had an impact on him:

The first one that like actually mattered to me, who has since come out as not straight is Miley Cyrus. I remember when I was like 13 and watching Hannah Montana, I thought she was like the coolest person in the world, and she wrote a song called ‘My Heart Beats for Love’ and she said in an interview that it was about her gay best friend, and I was like, ‘Oh my god Miley Cyrus has a gay best friend.’ Why am I not that person? If everyone in the world rejects me, I can just go become friends with Miley Cyrus.

In response, Cyrus—who opened up about her sexuality in 2015—posted to Instagram, thanking Sivan for “being brave” and that she’s inspired to continue her “work/purpose.”

Could a collaboration be next?