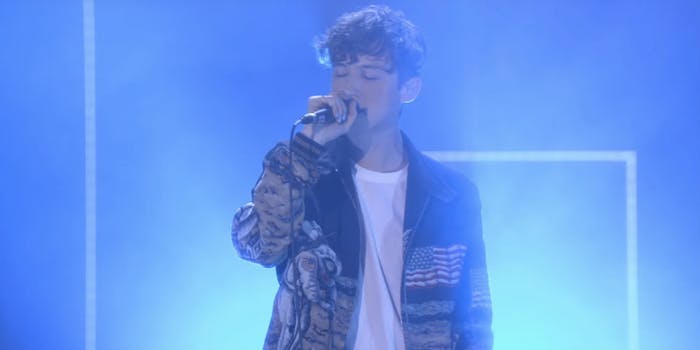 The 'Blue Neighbourhood' singer is officially the hot new thing.

Any questions about Troye Sivan transitioning from YouTube darling to breakout star were answered upon entering the Belasco Theater in downtown Los Angeles on Thursday night.

Yes, there were the teens—the YouTube fans who’ve supported him since he started posting videos in 2007—but they’re joined by a new demo that knows Sivan as a Billboard-charting musician. It’s the hip crowd, the people who see a band six months before it breaks out on mainstream radio and then brag that they were listening before it was popular. It’s straight boys taking Snapchat selfies with girlfriends, singing along to every number.

It’s also a gay crowd, which is already a huge part of Sivan’s brand on YouTube. And it’s an older audience, but older is, of course, relative. The crowd didn’t edge far beyond twentysomethings, unless you count the parents holding shopping bags. This mixture was the show’s real achievement: the trend-chasers and die-hard tweens and grinding gay men converging. Shout-outs from Adele and glowing press and TV appearances don’t hurt either.

Got sent this from Troye Sivan’s gig last night. It gave me chills ❤️ pic.twitter.com/4HGPKP2eVS

Production and performance-wise, Sivan is still finding his footing. There were a few audio glitches, and live versions of his more complex songs sometimes struggled with overproduction. His primary set pieces are the light-up houses he brought out on his initial tour, and the default setting on stage was a fog machine. Sivan’s stage presence has improved since his fall tour, both with better pauses for crowd engagement and storytelling and a more confident approach to his own movement. He still has a muppet-like quality, a certain bop to his dancing, but he fully owns it.

On songs like “Wild” and “Youth,” the crowd erupted into dance, and on slower tracks like “Talk Me Down,” they shouted along. Sivan never had trouble with the crowd filling in lyrics, which is often a foible of a newer artist. He even brought out Betty Who, who collaborated with Sivan on “Heaven,” and ended the duet with a sweet kiss.

All this success is not to say his die-hard fans aren’t still there. Sivan called out the long line waiting to enter by soundcheck, noting that he’s met them all 15 times before and was happy to see them again. During “Cool,” the crowd was speckled with homemade printed signs explaining they were “Troye-ing” to be cool, but that they were already cool—a message of positivity tied to Sivan’s Web presence.

By the end of the song, the signs were down and everyone was dancing, new Sivan fans indistinguishable from old.