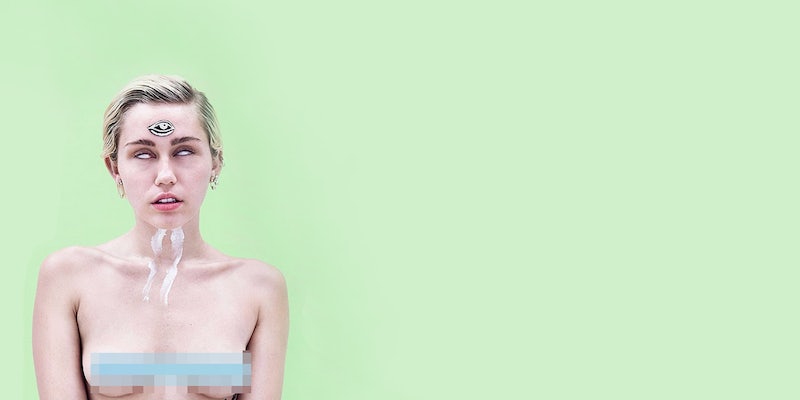 Miley Cyrus reveals her genderqueer side in NSFW interview

Miley Cyrus is once again pushing the boundaries of gender, sexuality, and art in her latest cover shoot and interview for Paper magazine.

“I don’t relate to being boy or girl, and I don’t have to have my partner relate to boy or girl,” Cyrus told Paper in a revealing NSFW interview accompanied by photos of the 22-year-old singer posing naked with a pig, covered in slimy mud, and wearing a beaded merkin (that’s a, um, pubic wig).

@mileycyrus in our #UseYourVoice Summer issue, on stands 6/22!Photographed by @paolakudacki, creative direction by @twinkleswinkle

She’s had serious romantic relationships with women, Cyrus said, but they simply didn’t end up in the spotlight the way her relationships with male partners like Liam Hemsworth did. She told the magazine that she first confessed her sexuality to her mom at the age of 14.

“I remember telling her I admire women in a different way. And she asked me what that meant. And I said, I love them. I love them like I love boys,” Cyrus told Paper. “And it was so hard for her to understand. She didn’t want me to be judged and she didn’t want me to go to hell. But she believes in me more than she believes in any god. I just asked for her to accept me. And she has.”

It’s a beautiful interview in which Cyrus expresses a deep desire to use her fame and privilege to make the world more accepting for queer and homeless youth. And the photos—of Cyrus in all her hairy-pitted and body painted weirdo glory—are super hot.