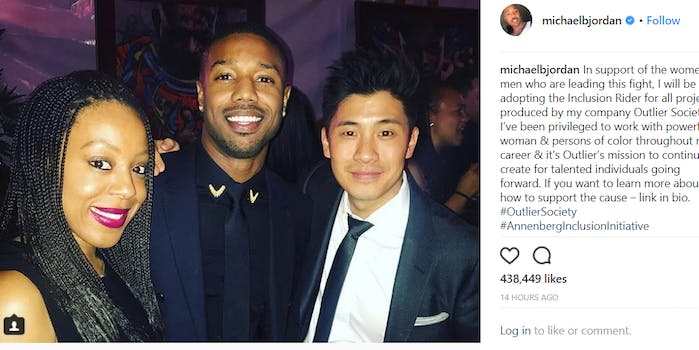 Michael B. Jordan pledges on Instagram to adopt inclusion riders

The 'Black Panther' star is taking a big step forward on diversity in film.

Frances McDormand put the idea of “inclusion riders” into the public consciousness with her Oscars speech on Sunday, and movie star of the moment Michael B. Jordan wants in.

The Black Panther actor on Wednesday posted on Instagram that his production company, the Outlier Society, would adopt the practice. Inclusion riders are addendums to contracts that require the hiring of diverse cast and crews.

In support of the women & men who are leading this fight, I will be adopting the Inclusion Rider for all projects produced by my company Outlier Society. I’ve been privileged to work with powerful woman & persons of color throughout my career & it’s Outlier’s mission to continue to create for talented individuals going forward. If you want to learn more about how to support the cause – link in bio. #OutlierSociety #AnnenbergInclusionInitiative

“I’ve been privileged to work with powerful woman & persons of color throughout my career & it’s Outlier’s mission to continue to create for talented individuals going forward,” Jordan captioned in a photo of him alongside Outlier Head of Production Alana Mayor and his agent Phil Sun.

The idea of inclusion riders has been kicking around since 2014, according to the Hollywood Reporter, but until McDormand mentioned them in her acceptance speech for best actress, the public was largely unaware of them.

“Look around, ladies and gentlemen, because we all have stories to tell and projects we need financed… Don’t talk to us about it at the parties tonight. Invite us into your office in a couple days, or you can come to ours, whatever suits you best, and we’ll tell you all about them. I have two words to leave with you tonight, ladies and gentlemen: inclusion rider,” she said.

Jordan’s two-year-old company has three projects in the works, including a Netflix science fiction series and a rebooted Thomas Crown Affair project set to star Jordan. It remains unclear how his pledge will impact those ongoing projects.