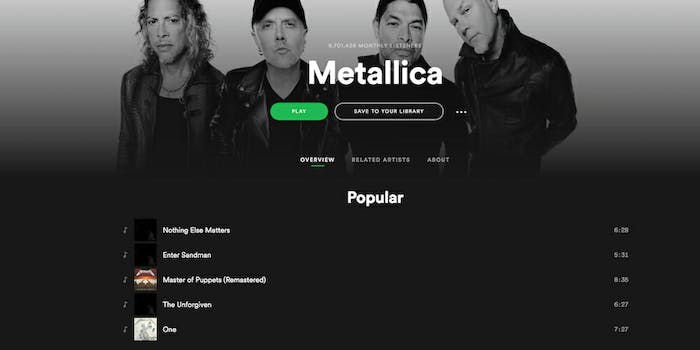 For those about to rock...

Metallica isn’t the first band that one thinks of when it comes to giving the fans what they want—remember these guys openly objected to Napster—but on a recent earnings call, Spotify CEO Daniel Ek divulged some interesting information about how the heavy metal legends use the streaming music service to their advantage.

Speaking to Quartz, Ek said that Metallica creates a setlist based on its most-popular songs in specific towns.

“You have an artist like Metallica, who changes their setlist on a city-by-city basis just by looking at Spotify data to see, which the most popular songs happened to be in that city,” Ek said. “We’ve never before been at a place in time where you could make as many informed decisions and understand your audience as well as we can do now as an artist.”

Letting fans have a say isn’t the worst idea, especially for a band such as Metallica with an extensive catalog of songs. Some apps allow fans to request songs for upcoming shows and some groups will even let the fans create a setlist for a specific night.

But fans have different expectations when it comes to concerts, especially since the average cost of a concert ticket is higher than ever. Hardcore fans want to hear the rarities while casual fans are only in attendance to hear the hits. Making the list from Spotify data would seem to favor the latter because people gravitate toward what they see and what’s popular. That’s why Spotify’s most-listened-to songs every year tend to mirror the radio. The only song in Metallica’s top listens that doesn’t appear in regular setlists is “Whisky In the Jar,” a boring Load/Re-Load-era cover.

It seems like the band that once rallied against free music online is now using a partially free streaming service to shape its shows. But hey, Metallica also joined Napster, so anything is possible.