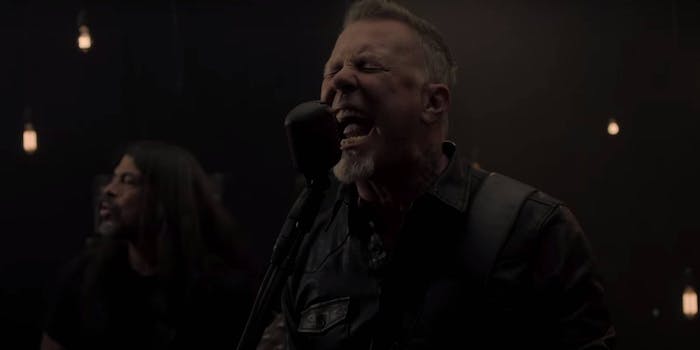 16 years after infamous lawsuit, Metallica is finally back on Napster

For many, Napster is still synonymous with Metallica, the band that sued the peer-to-peer platform in 2000 to have its licensed music removed from the site. It was a long, costly battle, and it caused many fans to turn on the group. Taken from another angle, it was a glimpse of digital-music battles to come.

But Napster has rebranded, and Metallica has a new album out soon, titled Hardwired…To Self-Destruct. The twist: Interested parties can find the band’s music on Napster.

According to Billboard, Metallica’s entire catalog will be available to subscribers. Napster said in a statement: “The release of Metallica’s new album comes at an incredible time for streaming music with streaming subscriptions accounting for almost half of industry sales in the first half of 2016.”

Fifteen years later, the digital music landscape is much different, but Metallica’s fanbase is apparently still there. In a 2014 Reddit AMA, drummer Lars Ulrich said: “I wish we had been better prepared for the shit storm that we found ourselves in. I don’t regret taking on Napster, but I do find it odd how big of a part of our legacy it has become to so many people, because to me it’s more like a footnote.”