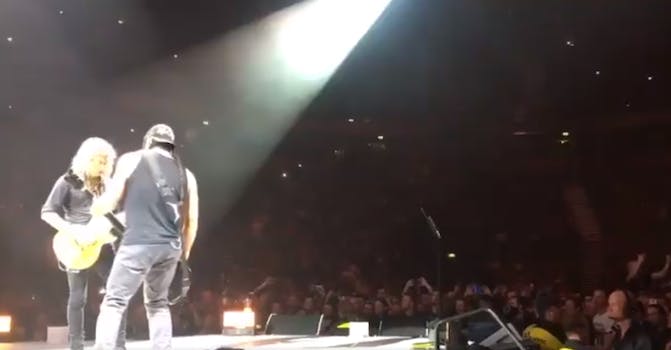 Since May’s devastating Manchester bombing, which killed 22 people, the U.K. has rallied behind Oasis’ last-call anthem “Don’t Look Back in Anger.” Arena mainstays like Ariana Grande, Coldplay, and U2 have performed it as a toast for solidarity. Its songwriter Noel Gallagher donated royalties from the 22-year-old single to victims’ families.

On Saturday Metallica joined them, leading Manchester Arena through a roaring singalong.

Here bassist Robert Trujillo and guitarist Kirk Hammett riff and lean on the crowd to do the rest. Drummer Lars Ulrich, who apparently filmed the singalong on his phone onstage, described it best: “Goosebumps.”

Manchester Arena, site of the bombing, reopened in September. Gallagher likewise commemorated the event with “Don’t Look Back in Anger.”