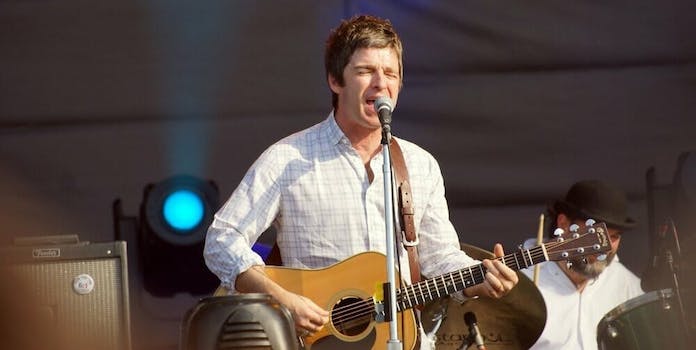 Ariana Grande and Coldplay performed the song during One Love Manchester.

Noel Gallagher has donated royalties from Oasis’ “Don’t Look Back in Anger” to the Manchester Fund, which is dedicated to helping victims of last month’s Manchester Arena bombing, NME reports.

Artists and fans have adopted the band’s 1996 smash hit as an anthem of resilience in the wake of the Manchester attack, which occurred during an Ariana Grande concert on May 22. Grande performed the song with Coldplay’s Chris Martin over the weekend during the One Love Manchester benefit concert, which also featured performances from Katy Perry, Miley Cyrus, Justin Bieber, and more.

Former Oasis co-leader Liam Gallagher recently blasted Noel on Twitter for not performing at the benefit show, calling his brother a “sad fuck.” Liam kicked off his solo tour last Tuesday at the O2 Ritz in Manchester, donating all profits to the Manchester Evening News’ British Red Cross appeal.

Radio X host Gordon Smart revealed yesterday, however, that Noel “secretly” donated the royalties from “Don’t Look Back in Anger.”

“I’ve seen some unpleasant headlines about Noel and why he never played the gig in Manchester at the weekend,” Smart said. “It’s only right to point out, and I don’t think this is public knowledge because I’m sure he would never mention it, but I found out today that as soon as ‘Don’t Look Back in Anger’ started to appear spontaneously at the vigils, he made sure all the royalties went to the families. That was before any gig was mentioned.”

Despite the longstanding animosity between the Gallagher brothers—who still have no plans whatsoever for an Oasis reunion—Martin thanked Noel on Twitter for allowing Coldplay to perform the song.

2/ everyone knew in advance you couldn't be there physically, so thank you for being there in spirit

3/ and for lending us those incredible songs. love cm

“Thank you @noelgallagher for giving your blessing and encouragement to play don’t look back in anger and live forever on sunday,” he wrote. “Everyone knew in advance you couldn’t be there physically, so thank you for being there in spirit… and for lending us those incredible songs. Love cm.”