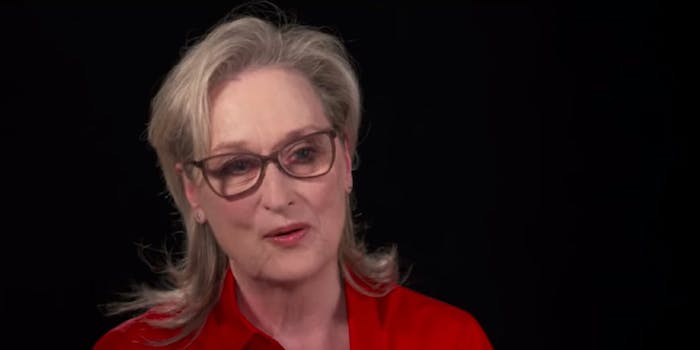 Streep thinks the first lady should talk about sexual harassment.

As soon as Hollywood erupted in a reckoning with workplace harassment and sexual misconduct, people questioned why industry figures didn’t speak out sooner—and many criticized Meryl Streep for her initial silence on the issue.

But in an interview published by the New York Times on Wednesday, Streep says her own involvement in the #MeToo movement shouldn’t be the focal point.

Streep and her co-star Tom Hanks spoke to the Times in anticipation of their film The Post. The conversation turned from the movie to President Donald Trump, Harvey Weinstein and the #MeToo movement that allowed women to share their personal experiences with sexual misconduct.

Streep has been lauded as an advocate for women in the media industry, especially since her 2017 Golden Globes speech calling for equality.

But Rose McGowan, who says Weinstein raped her, called out Streep for her “silence” and “hypocrisy” in regards to the accusations against Weinstein. Streep has maintained that she didn’t know about Weinstein’s rape and sexual abuse of his female colleagues.

“The disgraceful news about Harvey Weinstein has appalled those of us whose work he championed, and those whose good and worthy causes he supported,” Streep said in a statement to the Huffington Post.

A right-wing street artist put up posters around Los Angeles of Streep next to Weinstein and with her eyes blocked out by text that said, “She knew.” But the artist eventually admitted he only assumed the actress knew about the abuse before the allegations surfaced.

Streep’s wish for the first lady to take place in the conversation surrounding #MeToo will likely go unfulfilled. Melania Trump has spoken out against cyberbullying but has regularly defended her husband amid accusations of sexual harassment and his infamous “grab ’em by the pussy” comments.

Ivanka Trump, for her part, talked about workplace harassment during a speech in Japan but has nevertheless stood by her father despite 19 allegations of sexual assault against him.

Read the Times‘ full interview with Streep and Hanks here.