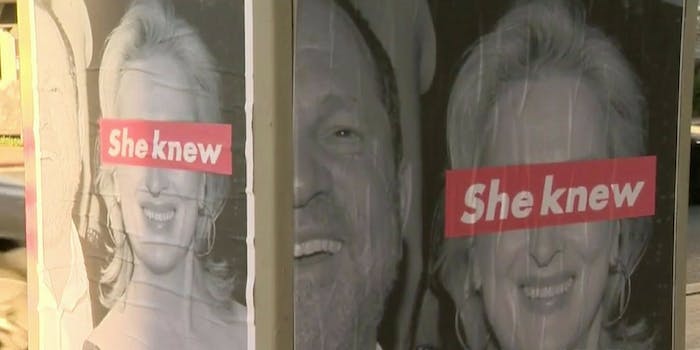 The man behind the guerilla-style posters around Los Angeles alleging Meryl Streep knew about Harvey Weinstein‘s systematic abuse doesn’t actually know if Streep knew. But hey, he thinks she probably did.

Speaking to the Guardian, right-wing street artist Sabo admitted to creating the posters of Streep with her eyes blocked out in text that alleges, “She knew,” alongside ousted producer Weinstein. Sabo, a former U.S. marine who got his name from a tank munition called sabot, said he created the campaign because Streep denounced President Donald Trump in her Golden Globes speech this past year. Sabo has previously been criticized for being racist and misogynistic, assessments he’s denied, and he initially denied being responsible for the poster campaign.

“She’s swiping at us so we’re swiping back,” Sabo told the Guardian. “I wasn’t sitting in a room with her. I can’t say 100 percent. But I’d say anyone in the [film] industry had a pretty good idea. I think she knew. Maybe she was providing Weinstein with the fresh meat.”

The poster campaign comes on the heels of actor Rose McGowan‘s criticism of Streep for planning to attend this upcoming Golden Globes awards dressed in black, in solidarity with women who have experienced sexual harassment and assault. In a now-deleted tweet, McGowan said Streep’s and other women’s “silence” within a silent protest was the problem. Sabo turned Streep’s response of “I didn’t know” into a viral sensation.

In response, Streep penned a statement to reassure McGowan that she didn’t know about Weinstein’s abuse of dozens of women in the entertainment industry and that her previous silence on the producer’s behavior was due to lack of knowledge, not fear of speaking out.

“…I want to let her know I did not know about Weinstein’s crimes, not in the 90s when he attacked her, or through subsequent decades when he proceeded to attack others. I wasn’t deliberately silent. I didn’t know,” Street said in a statement.” I don’t tacitly approve of rape. I didn’t know. I don’t like young women being assaulted. I didn’t know this was happening.”

An estimated dozen posters were put up around Los Angeles on Tuesday by an assistant of Sabo’s, including near Streep’s Pasadena house, and by the 20th Century Fox lot, the company which made Steep’s latest movie The Post. Streep depicts Katherine Graham in the film, which follows Graham’s leadership at the Washington Post in the 1970s during the publishing of the Pentagon papers. Sabo said another conservative artist suggested he target The Post for being “used as a platform” to criticize Trump’s broad assessment of the media being “fake news,” but aimed at Streep instead.

Sabo had previously created a billboard targeting Democratic Sen. Al Franken, who has scheduled his resignation amid accusations that he groped and forcefully kissed multiple women before and throughout his time in office.

While Sabo had no issue targeting Franken and Streep, he told the Guardian that he had no reason to criticize Trump for bragging about sexually assaulting women by grabbing them “by the pussy.”

“I don’t know a man who I’ve had a beer who doesn’t talk shit like that. We don’t have proof of Trump doing it,” he said. “Who am I to judge him on that?”