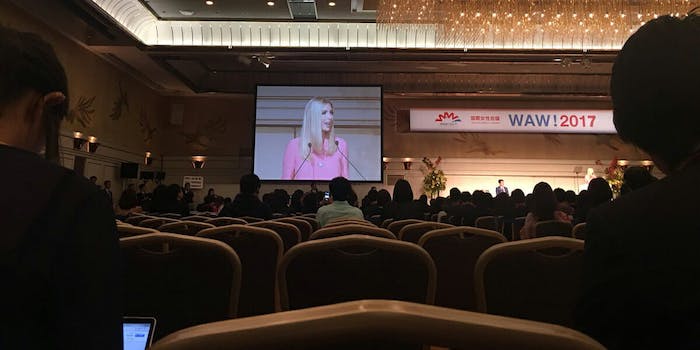 Nobody went to see Ivanka Trump talk about women’s empowerment

The room was half empty.

Ivanka Trump gave a talk on women’s empowerment and sexual harassment to shockingly few people in Tokyo on Friday. A photo from Trump’s speech at Japan’s World Assembly for Women showed a half-empty hall.

The hall is half empty as Ivanka Trump gives a speech in Tokyo at the Japanese government’s “World Assembly for Women” (WAW!) pic.twitter.com/8OchiSzgHa

Officials reportedly said Trump’s speech was the most popular event of the three-day assembly and blamed tight security measures for people not being able to enter the hall before the doors were closed.

But if there were long lines or crowds waiting to get in, the Guardian and other attendees didn’t see them. The New York Times reported that the room was so empty, ushers asked people to move forward in the audience before Trump took to the podium.

Trump—who identifies as a former punk and is well known in Japan for her modeling and fashion line—spoke to the scant crowd about issues that face women in the workplace, including lack of respect.

“This takes many forms, including harassment, which can never be tolerated,” said Trump, whose father, President Donald Trump, has bragged about sexually assaulting women.

Ivanka Trump was booed at a panel in Germany earlier this year when she described her father as “a tremendous champion of supporting families.”