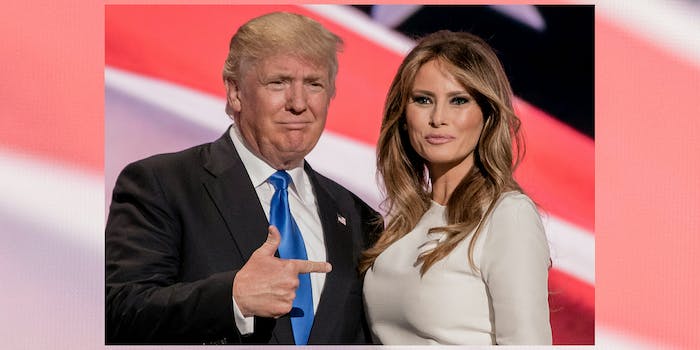 The first lady isn’t an advocate of the abused; she’s a complicit enabler.

If making excuses for her husband’s disgusting, sexist behavior is how Melania Trump plans to handle cyberbullying, then the first lady is off to an auspicious start.

Donald Trump, America’s flame-warrior-in-chief, tweeted a series of comments about Morning Joe co-host Mika Brzezinski on Thursday—outraging a nation that didn’t know it could still be outraged. Brzezinski, once known as a rare voice in the media moderately favorable to Trump, made light of a fake Time magazine cover hung in the president’s golf resorts. The mock photo depicts the president’s many “accomplishments,” including solving climate change, fixing the healthcare system, and dominating TV ratings with The Apprentice franchise. It’s yet another glimpse of just how thirsty our widely hated POTUS is for our collective adoration; he’s a wannabe Kim Jong-un with an even worse haircut.

Trump, lashing out at being mocked as he has so many times before, took aim at Brzezinski’s appearance. Calling her “low I.Q. crazy,” he claimed that the MSNBC talking head attended the Mar-A-Lago for three nights around New Year’s’ Eve. Brzezinski requested an audience with the president, but Trump claims he declined, saying that she was “bleeding badly from a face-lift.”

The former Melanija Knavs, the Serbian immigrant turned Gilead spokesmodel, issued a defense of her husband’s indefensible remarks the only way a silent spouse knows how: her publicist. Her communications director, Kaitlan Collins, told CNN in a statement: “As the First Lady has stated publicly … when her husband gets attacked, he will punch back 10 times harder.” Melania herself has yet to speak a word about Trump’s remarks, which the president doubled down on Friday morning by taking another jab at Morning Joe. He called it “low-rated” and a “bad show.”

For anyone with a longer memory than the goldfish swimming around inside Melania’s head, this is exactly the kind of thing Mrs. Trump pledged to stop in her new position. She told a November crowd gathered in Berwyn, Pennsylvania, a wealthy Philadelphia suburb, that she would use the Office of the First Lady to tackle cyberbullying.

“Social media is a centerpiece of our lives,” Melania said. “But like anything that is powerful, it can have a bad side. We have seen this already. As adults, many of us are able to handle mean words, even lies. Children and teenagers can be fragile. They are hurt when they are made fun of or made to feel less in looks or intelligence. It is never okay when a 12-year-old girl is mocked, bullied or attacked. It is terrible when that happens on the playground. And it is absolutely unacceptable when it’s done with no name hiding on the Internet.”

This statement is frankly unbelievable coming from the wife of the internet’s biggest supervillain, a man who trolled his way to the presidency. But bullied youth need all the advocates they can get—even Lady Luthor. While the Office of the First Lady may not have much actual power, the position often serves to highlight important issues worth addressing. Established by the late Jackie O, Mrs. Kennedy used the office to modernize the White House, then in desperate need of renovation. For Hillary Clinton, her issue was health care. Michelle Obama chose nutrition in school lunches.

But Melania’s telephone-game press release fully unmasks what her anti-bullying pledge has always been—a hollow, cynical fraud, much like her husband’s career. Defenders might chime in with a “well, actually” that it took Mrs. Obama 12 months to get Let’s Move! off the ground. Michelle, though, wasn’t literally married to the problem.

After Trump announced his campaign for the presidency in 2015, advocacy groups like the National Education Association (NEA) have noted a sharp increase in harassment and violence in schools—particularly religious and ethnic minorities, as well as LGBTQ students. The Documenting Hate Project detailed an exhaustive and repulsive list of the hate the POTUS has inspired. Following the election, a student in Brea, California, told her black classmate that Trump would send her “back to Africa,” saying it’s where she belongs. An African-American girl in Shakopee, Minnesota, was surrounded by a group of students singing the National Anthem. Instead of the signature closing line, they changed it to: “And the home of the slaves!”

Whether on or offline, these incidents have damaging, long-lasting effects. StopBullying.Gov reports that nearly half of students in K-12 schools report being bullied by their peers, and many of these incidents take place on social media. An estimated 43 percent of these students experience cyberbullying, and survivors may require long-term—if not lifelong—mental health treatment to cope with this abuse.

Others may never get the help they need. Brandy Vela, an 18-year-old student in Texas, experienced a level of cyberbullying that is—to put it mildly—unimaginable.

Trolls opened an online dating profile in Vela’s name and claimed that she was giving away sex for free, as CBS News reported. The anonymous hecklers repeatedly texted her using an untraceable phone, taunting her about her weight. It didn’t even stop after Vela tragically took her own life last year. After her Dec. 7 funeral, a Facebook page appeared to memorialize the high schooler but was quickly flooded with hate. Calling Vela a “coward,” posters claimed, “You should have done this a long time ago.”

Since her husband took office, Melania has done absolutely nothing to make America a safer place for students like Vela, as she once promised. The Daily Beast and USA Today spoke with anti-bullying advocates across the U.S., and not a single one has had a meeting from the Office of the First Lady. This exhaustive list of organizations the White House has failed to contact include the National PTA, Bullying Research Network, Family Online Safety Institute (FOSI), Institute of Digital Media and Child Development, and Family Online Safety. Many have sent their recommendations and suggestions to the first lady, which elicited no response in return.

There’s even question about whether Mrs. Trump—who didn’t even want the office, if you remember—plans to follow through on her once-impassioned mission at all.

Trump press secretary Stephanie Grisham told USA Today that Melania is “being very thoughtful when it comes to building out her initiatives,” taking time to build a team. Grisham claimed her office numbers 10 hires. But Grisham also told Politico that the bullying issue had been abandoned altogether. “While cyberbullying is something she speaks out against, that is but one subset of her focus around the overall wellness of children,” Grisham told the outlet in an email.

Melania may very well end up being the anti-bullying czar that no one, except her PR team, ever believed she truly wanted to be. The first lady’s reluctance to fulfill the expectations of the president’s spouse has become a never-ending #FreeMelania meme—whether it’s her pained expressions, studied distance from her husband, or awkward attempts to show Trump basic affection. Small hands, it seems, must hold themselves. But most likely she won’t be. As everyone expected from a presidency that’s redefined rock bottom, it’s just a failed attempt to mask that Melania is chained to a man who harasses women, sexualizes children, and attacks fallen soldiers with ruthless efficiency. He is a German train of gross offense.

And what’s more, Melania has stood by her man at every turn. For everyone who has claimed that the first lady is a victim of her husband, she is his biggest defender. After the Access Hollywood tapes, in which Trump effectively claims that famous men are allowed to sexually assault women, leaked to the public, Melania called it “boy talk.” As a dozen women accused the president of doing exactly what he described in that recording, grabbing them without their consent, she continued to force a smile for photo-ops. Mrs. Trump isn’t an advocate of the abused; she’s a complicit enabler.

One could say that Melania should feel ashamed for trying to spin the torment that kids across the country experience every day into a tossed-off bit of good PR for her politician husband. But that would suggest anyone in the White House still has the capacity to feel shame.