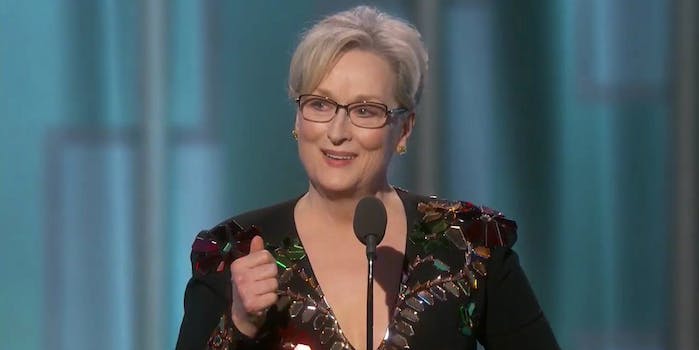 Trump has already dismissed her as a 'Hillary lover.'

At the 74th annual Golden Globe awards, Meryl Streep used her time at the pulpit to show Hollywood, reporters, and Americans how to challenge power—particularly President-elect Donald Trump.

On Sunday night, Streep received the Cecil B. DeMille Award, an honor given to people who have made “outstanding contributions to the world of entertainment.” In Streep’s six-minute long speech, she took Trump to task without ever referencing him by name. She also, in the words of her deceased friend Carrie Fisher, encouraged the audience to “take your broken heart, make it into art.”

Streep opened by discussing the diversity of Hollywood and its “foreign” actors, insisting that if we kick performers out of the United States, “you’ll have nothing to watch but football and mixed martial arts, which are not the arts.”

Streep then scrutinized Trump’s own “performance” where he allegedly mocked a disabled New York Times reporter while on the campaign trail, saying it broke her heart. She also called upon the press to hold people in positions of power accountable for their actions.

“Disrespect incites disrespect. Violence incites violence,” she said. “When the powerful use their position to bully others, we all lose.”

Many on Twitter praised Streep’s words as one last call to action before Trump’s presidential inauguration on Jan. 20.

Yes, fuck you Vaughn and Gibson. You're gonna sit there and get woke by Meryl Streep AND YOU CAN'T DO SHIT. pic.twitter.com/ric9qGAFWT

watched Meryl Streep's golden globes speech & wow, my girl said nothing but tea, glad such an actress cares abt the lives of all individuals

I'm getting Meryl Streep's Golden Globes speech tatted on my ass. The attacks on Trump will be in bold.

This is the way the world ends – not with a bang but Meryl Streep's speech. #GoldenGlobes

It didn’t take long for Trump to vilify Streep’s scathing opinion of his soon-to-be presidency. That night the president-elect told a New York Times reporter that Streep was “a Hillary lover,” referencing her support of Democratic presidential candidate Hillary Clinton. He also dismissed the allegations that he intended to mock the reporter’s disability.

Though Trump said he had not seen Streep’s speech or any other moments during the ceremony, he said he was “not surprised” to be attacked by “liberal movie people.”

“People keep saying I intended to mock the reporter’s disability, as if Meryl Streep and others could read my mind, and I did no such thing,” Trump said. “And remember, Meryl Streep introduced Hillary Clinton at her convention, and a lot of these people supported Hillary.”

Early Monday morning Trump continued his critique of Streep on Twitter, calling her overrated and a “Hillary flunky.”

Hillary flunky who lost big. For the 100th time, I never "mocked" a disabled reporter (would never do that) but simply showed him…….

"groveling" when he totally changed a 16 year old story that he had written in order to make me look bad. Just more very dishonest media!

You can watch Streep’s full speech in the Twitter embed above and read the transcript here.