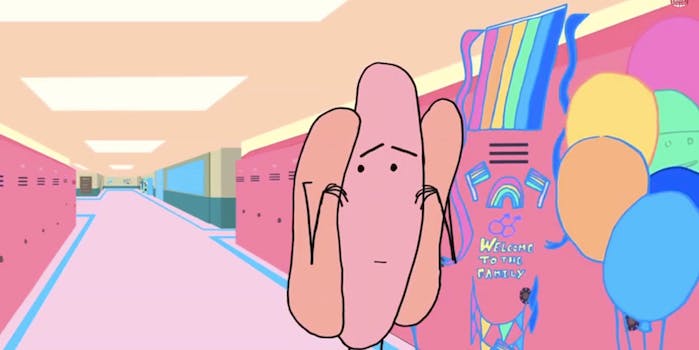 Fast food and acceptance pair well in this new series.

If an out-and-proud french fry and a still-in-the-closet hot dog can find love, there’s hope for us all.

At least, that’s part of the message behind McTucky Fried High, a new webseries that brings an LGBTQ focus to the world of animation.

Robert Carnilius, the filmmaker and graphic designer behind the series, said the inspiration for the show came from a class assignment to create a collection of drawings.

“I sat down and sketched out all these characters who were bursting with personality,” he told The Daily Dot over email.  “A year later, when I found out about the Chicago Digital Media production fund, I returned to them and thought to myself, there really aren’t any LGBTQ characters in mainstream animation and I have all these characters waiting to come alive who are LGBTQ, we can really do something here.”

The characters are an assortment of food products, from a politically ambitious baby carrot to pimply pizza slice. While LGBTQ visibility has risen in animation recently, especially with the much-touted end of Legend of Korra, McTucky Fried High is a pioneer in an overwhelmingly LGBTQ cast. Of course, it’s not all peace and rainbows, with some haughty organic products wreaking havoc and destructive twerk-offs abounding.

Two episode have aired so far, with the third coming soon.

“Episode 3 is perhaps one of my favorite episodes,” said Carnilius. “It tackles gender identity and gender expression as Peanut, who identifies as genderqueer, gears up for school photos. Peanut can be seen in the first episode chasing the ‘homophobe’ down the hallway with a pitchfork. They have a take no prisoners and aren’t afraid to stand up for what they believe in.”

This webseries definitely makes us excited for the future of animation, and perhaps a little hungry too.