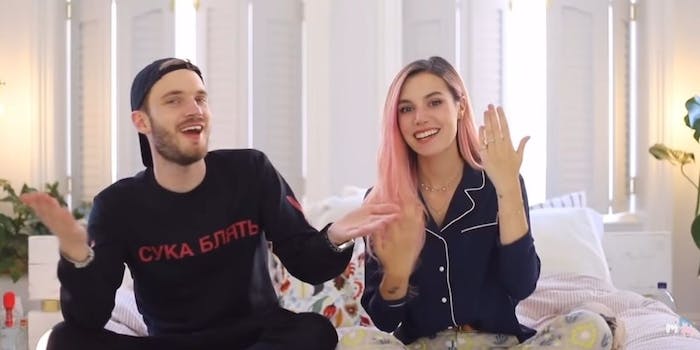 Why YouTube star Marzia is leaving the platform for good

She's ready to try something else.

PewDiePie is about to lose his title of the most popular YouTuber in the world. Now, his fiancée, Marzia Bisognin, said in a video on Monday that she’s leaving the platform for good.

Marzia, who was once known as CutiePieMarzia, has more than 7.4 million subscribers, and for the past seven years, she’s brought her fans along on her journey into YouTube and into her relationship with PewDiePie, aka Felix Kjellberg. But throughout her own YouTube career, she’s struggled with feelings about her channel and why she was making content.

Though PewDiePie will become the second-most popular YouTuber in the world soon after T-Series, India’s largest music label, surpasses him in subscribers, he and Marzia were seen as one of the platform’s most powerful (and most well-liked) couples. Now, she wants something new.

“This might seem so sudden to some of you,” she said. “But it’s something I’ve known for a long time. I’ve struggled with finding a reason to keep going. I didn’t know how to talk to you about it. I just had to open up and let you know how I’m feeling.”

In her final vlog, Marzia runs through the story of her YouTube journey, which included discovering PewDiePie’s gaming channel in 2012, moving from Italy to Sweden to live with him after only a few months of dating, and starting her own YouTube channel even though at first she believed YouTube consisted solely of gaming and cat videos.

She said she’s shy and introverted and that the prospect of starting her own channel was daunting, but she got help from Kjbellberg and soon discovered her own corner of the internet. And then PewDiePie exploded in popularity.

“I was thrilled for Felix, but I felt like I was a fraud,” she said. “I definitely didn’t deserve all the attention. I just happened to know someone who did.”

Marzia built a healthy audience for herself and didn’t seem to take criticism despite Kjellberg’s racist taunts while gaming and for getting into nasty feuds with other streamers. But she said YouTube was also stifling her real life, and she realized that she was following somebody else’s path.

“You gave me the best years of my life, and I’m probably going to miss this,” she told her fans. “I have to listen to what I’m feeling on the inside.”