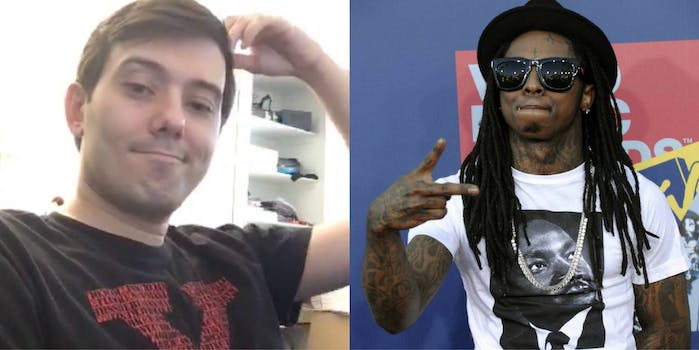 On Thursday, the price gouger tweeted a warning shot about his next rap album acquisition, which was going to make his infamous purchase of Wu-Tang Clan’s Once Upon a Time in Shaolin “look like peanuts.”

As it turns out, Shkreli somehow got his hands on Lil Wayne‘s unreleased 2014 album Tha Carter V. Shkreli revealed the purchase on Periscope on Friday, playing at least one track from the long-awaited album.

Though Shkreli deleted the original Periscope of him playing parts of the album, the video has been preserved online. In the clip below, he makes the announcement and plays part of a track around the 4:37 mark.

“Should I release it to the public? Birdman might kill me,” Shkreli said. He also didn’t reveal how much he paid for the two-disc album.

Early the following morning, Shkreli reappeared on the platform and played what appears to be a different track of the album while addressing criticism of his purchase.

“Man, y’all hating on me, but no hate for Birdman, no hate for Lil Wayne. Man, fuck all y’all. At least I’m doing something to get this music,” Shkreli said at the beginning of the the hours-long live stream.

Shkreli’s alleged purchase wraps up a years-long battle between Lil Wayne and his former label’s manager Birdman to release Tha Carter V. The album was scheduled to drop in May 2014 and then was pushed back to December. Then, it was taken off the table altogether. Lil Wayne claimed Birdman refused to release the finished album, though Birdman has said he doesn’t have a copy and that the rapper holds the physical recording.