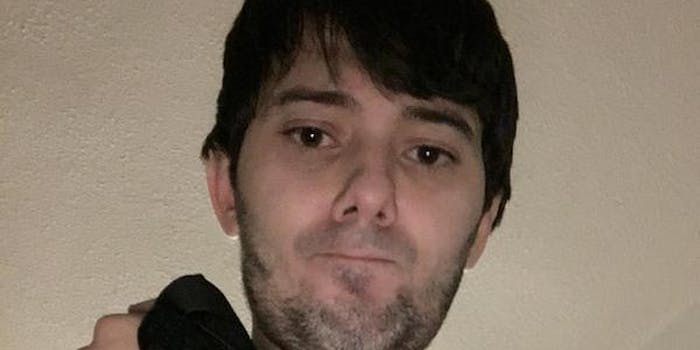 Cash rules everything around us.

Martin Shkreli has made quite a name for himself in the past few weeks.

First, the Turing Pharmaceuticals CEO caused a stir in September by hiking the price of AIDS drug Daraprim 5,000 percent—charging patients $750 per pill when the price had originally been $13.50. It was a move that sparked a lot of public outrage and launched an antitrust probe into his company from the New York attorney general.

As Samantha Allen of the Daily Beast put it: “Shkreli, whose company only acquired Daraprim last month, has already dethroned the dentist who killed Cecil the Lion as the most-hated man in America.”

Just when it seemed like the dust had finally settled on his media coverage, we’ve been handed another unsavory development regarding this guy’s investments. Bloomberg revealed today that the previously unnamed private citizen who’d purchased the one-of-a-kind, single-existing copy of Wu-Tang Clan‘s album, Once Upon a Time in Shaolin, in 2014 was none other than Shkreli. His winning bid was “in the millions.”

The album was recorded by Wu-Tang in secret over the course of a few years and features guest vocals from surprising artists like Cher. There was even a Kickstarter from fans who wanted to buy the album and share it with the world.

But, in the band’s own words, cash rules everything around us, and it looks like Shkreli’s private funding won out over the fans’ grassroots approach. Until this point it had been assumed that a private individual had bought the LP, but the fact that it’s this particular private individual has people on social media riled up all over again.

Ever the troll, Shkreli stirred the pot this afternoon by asking whose music he should buy next:

The replies have been less-than-friendly:

@MartinShkreli Your the main reason why capitalism is despised. Asshole.

Shkreli’s name has been trending in the U.S. all afternoon.