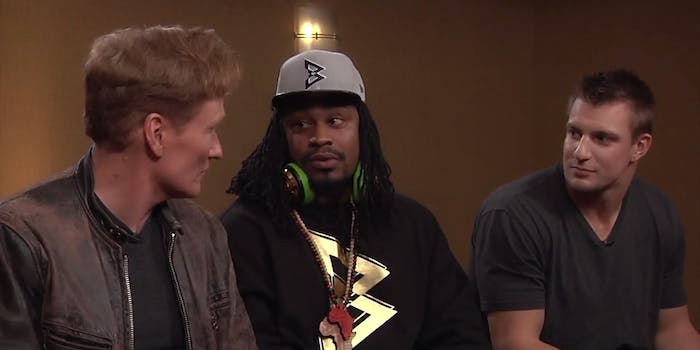 It's pure gold as both a videogame competition and a football pre-show.

The New England Patriots and the Seattle Seahawks will face off in the Super Bowl on Sunday for what will hopefully be the most interesting mashup in recent memory. But thanks to Conan O’Brien, two of Sunday’s biggest stars have been given a chance they won’t get on game day: to play directly against each other.

Marshawn Lynch and Rob Gronkowski won’t be on the field at the same time on Sunday since they both play offensive positions. On Conan, however, they found themselves on a different playing field: Mortal Kombat X, courtesy of Conan’s recurring “Clueless Gamer” segment. With Gronkowski’s experience playing Mortal Kombat as a kid and Lynch’s claim that he’ll button-mash, anything could happen.

Between the graphics and the gore, it’s not your old-school arcade game. There’s a fair amount of disgust—and in O’Brien’s case, a “sexual thrill”—to go around. Both players actually seemed to be having fun with it. Gronkowski had plenty of phallic jokes, while Lynch asked O’Brien at one point if he was on drugs.

May this newly forged rivalry bleed into the older one on Sunday.